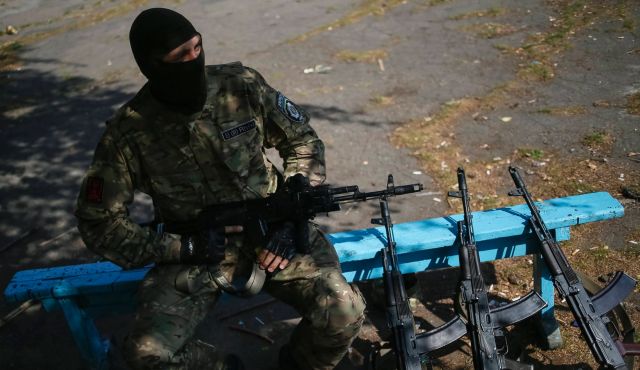 A member of a Ukrainian police task force sits during a drill at Slaviansk, Monday. Photo by Reuters

Kiev was eyeing equipment that it could use against the Moscow-backed separatists, according to Channel 2.

The Foreign Ministry has halted a drone sale to Ukraine out of fears the deal would antagonize Russia, an ally of breakaway regions in east Ukraine, Channel 2 television reported Monday night.

In recent weeks, a Ukrainian delegation was in Israel to discuss weapons purchases, including drones that could be used against the Russia-backed separatists, Channel 2 said.

The Defense Ministry reportedly approved the deal with the Israeli maker of the unmanned vehicles, Aeronautics Ltd., but the Foreign Ministry vetoed it.

Officials from the foreign and defense ministries have declined to comment.

Israel does not normally name the countries to which it sells arms, and the state often refuses to publish such information, citing security concerns.

At the beginning of the year, separatists reported that Israeli defense firms had exported weapons to 29 countries over the past decade. But the state only gave figures for 2011 and 2012, saying that weapons in those years had been sold to Spain, the United States, Kenya, South Korea and Britain.

This information was published in response to a court order following a freedom-of-information petition by an Israeli lawyer.

According to the government, the information is based on its annual report to the UN Register of Conventional Arms, which receives voluntary reports from countries on imports and exports of conventional weapons. The five states that Israel listed had reported those deals to the United Nations, so Jerusalem was willing to disclose their identities.

But Haaretz learned in January that in 2012 Israel sold Spike anti-tank missiles to Chile but did not report the number of missiles sold. That year, Israel also sold 47 9mm handguns and 5,700 assault rifles to Mexico.

Between 1992 and 2009, Israel reported on its weapons exports only partially. In 2009, it said it had sold 18 120mm mortars and three truck-mounted weapon systems to Uganda.

In many cases, it was the purchasing countries that reported deals, such as Peru, which in 2009 received 516 Spike missiles and 48 missile launchers from Israel in 2009.

According to figures presented to the Knesset State Control Committee by the Defense Ministry this year, around 8,000 arms export licenses are granted annually out of 9,000 requests. These weapons go to some “130 countries and entities.”

According to the United Nations, over the past two decades, Israel has sold 17 tanks, 74 armored vehicles, more than 8,600 artillery systems, 37 planes, 10 warships and roughly 2,500 missiles and missile launchers.

This is only a partial list, based on voluntary reports from countries including Chad, Rwanda, Lesotho, Kazakhstan, Romania, Chile, Brazil, Italy, the United States, Vietnam, Cameroon, Uganda, India, Mexico, Spain and Turkey.