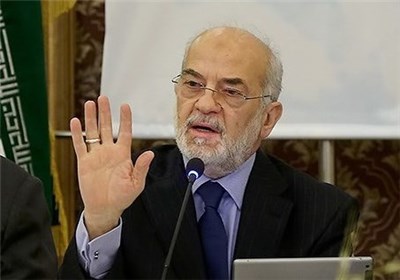 TEHRAN (Tasnim) – Iraq’s Foreign Minister Ibrahim al-Jaafari said Baghdad opposed the decision to not invite Iran to an anti-ISIL conference in Paris, aimed at countering the rising threat of the Takfiri terrorist cult.

“Iraq was not the host of the conference, so this was not our decision to make; however we did not agree with the exclusion of Iran,” Ibrahim al-Jaafari told Press TV.

The Iraqi foreign minister said that “one or two countries” refused to allow Iran be included in the anti-ISIL conference.

He expressed hope that Iran’s exclusion from the forum would not have “negative effect on the friendly and constructive role Iran plays in Iraq.”

The Iraqi official further said that “certain countries arm and finance” the ISIL terrorists for “religious or political” reasons.

On Monday, France hosted a conference, dubbed the International Conference on Peace and Security in Iraq, to discuss ways of tackling the ISIL terrorists in Iraq and Syria amid US efforts to form a so-called international coalition to battle the Takfiri group.

Despite the international community’s emphasis on the importance of Iran’s role in the regional developments, Tehran was not invited to the meeting in Paris mainly due to the US opposition.

The US has also announced that Iran will not be a part of its so-called coalition against the ISIL.

Iran has cast doubt over the sincerity of the coalition and reiterated that it has no interest in attending the Paris meeting.

Tehran has on several occasions voiced support for the Iraqi government since it began fighting against the ISIL in June. The ISIL terrorists are in control of some areas in Syria and have captured large swathes of land in neighboring Iraq.

The Takfiri terrorist groups have committed heinous crimes and threatened all communities, including Shiites, Sunnis, Kurds, Christians and Izadi Kurds, during their advances.