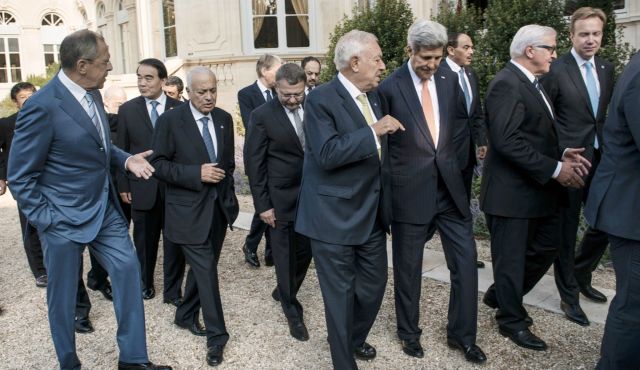 30 foreign leaders have committed their countries to fighting ISIS, yet many Arab states are exercising caution

Leading politicians from around the world at the Paris conference against Islamic State, September 15, 2014. Photo by AP

Thirty foreign leaders have committed their countries to fighting IS in Iraq, but the Arab countries in particular are exercising extreme caution.

Yesterday’s conference in Paris of the countries in the coalition against Islamic State was convened to divide up the jobs: Who will attack, who will supply intelligence, who will provide funding, and who will fight on the ground.

This coalition, unofficially nicknamed “the coalition of the willing,” has already been divided into two – the countries willing to assist the military effort but not to operate in Iraqi or Syrian territory; and the countries able to operate militarily.

This distinction has nothing to do with the military capabilities of those countries, but with the diplomatic and political obstacles that place these countries on different rungs of the ladder in the military effort.

So, for example, Saudi Arabia and the United Arab Emirates have said they are willing to operate militarily in Iraqi and Syria air space, but won’t send in ground forces.

Saudi Arabia is also prepared to permit the use of its airports as staging areas for attacks. In this they are lining up with the strategy of U.S. President Barack Obama, British Prime Minister David Cameron and French President François Hollande – all are reluctant to get caught up in a ground operation in Iraq, let alone Syria.

Lower down in the rankings is Jordan, which is prepared to provide primarily intelligence, and which has been training thousands of Syrian rebel militiamen for months. But for now its air bases will not be used to wage war against Syria or Iraq.

Egypt’s contribution is similarly in the realm of intelligence and declarations, but its presence in the coalition is crucial, because it empowers the Arab side of the coalition diplomatically. It’s worth remembering that Egyptian President Abdel-Fattah al-Sissi initiated the Arab coalition.

The Gulf states – Qatar among them – will share in the enormous financial effort, and fund an as-yet-unknown portion of the war’s expenses.

At the bottom of the list of willing states is Turkey, which has joined the call to eradicate IS in Iraq and Syria, but on condition that it not be at Turkey’s expense.

Turkey will not allow fighter jets to take off from its airports or from the NATO base in its territory, and of course it won’t send any troops. In general, it will be a silent partner.

Its official explanation for this is that, before attacking, there must be a united and agreed-upon Iraqi government, and Syrian President Bashar Assad must be removed from power.

But the real reason is that Turkey fears for the lives of the 49 Turkish hostages being held by Islamic State, and also fears IS attacks on its soil in revenge for its participation, especially after it emerged that some 1,000 Turks have joined the extremist organization.

While a possible attack on Iraq has earned a nod even from Iran and silence from Russia, Syria is a different story.

Iranian Supreme Leader Sheikh Ali Khamenei is not only denying what was recently published about possible cooperation between the United States and Iran in the war against IS, it has now accused the United States of initiating this new war to strengthen its presence in the region.

Iran is demanding that the war against IS include Syria, saying that without it and without Iran, no military effort will be complete. Iran’s position kept it out of the Jeddah conference on terrorism that took place last week, and it wasn’t invited to Paris, either.

But Iran is not particularly upset at being left out. It and Russia hold enough deterrent power to prevent either Western or Arab air strikes on Syria that are not coordinated with them.

Although Bouthaina Shaaban, Assad’s eternal adviser, warned that Syria would attack any U.S. planes that invaded its air space – in response to which Obama threatened to destroy Syria’s air-defense systems – Washington is not really concerned about Syria’s response, but about the reactions of Russia and Iran.

Despite the differences in the level of participation and assistance, it is a respectable enough coalition to give Obama a green light for military action.

On the one hand, the United States will not be the only aggressor in the area, while at the same time Obama gets political points for taking the initiative.

The real test will come at the attack stage. For example, how many Iraqi (or Syrian) civilians will have to be killed in air strikes before the coalition begins to regret its entanglement?

How many Sunni Iraqis – whom Washington wants as partners – will become Islamic State’s human defensive shield?

How will Saudi Arabia explain its willingness to cooperate with Washington, which wants to fight Sunnis – albeit extremist ones – to defend a Shi’ite Iraqi government?

These are just a few of the questions that will arise during this struggle against Islamic State.