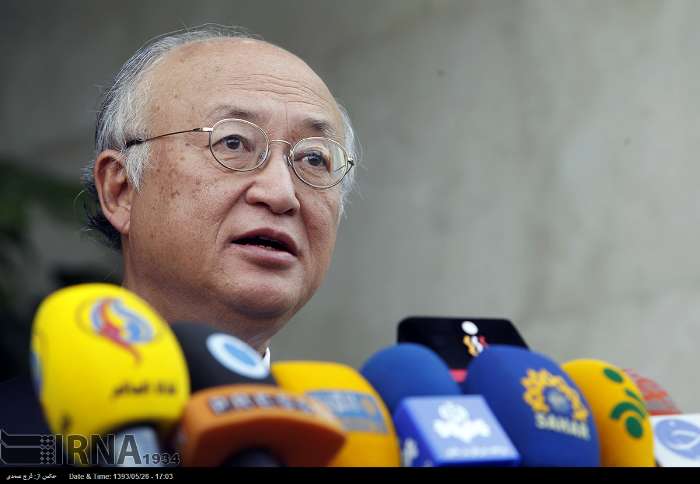 (Reuters) – The U.N. nuclear watchdog sought to put pressure on Iran on Monday to address suspicions it may have carried out atomic bomb research, three weeks after Tehran failed to meet a deadline for providing information about the issue.

In line with the findings of a confidential report by the International Atomic Energy Agency earlier this month, Director General Yukiya Amano said Iran had not carried out two of the five transparency steps it had agreed to implement by Aug. 25.

A lack of progress in the IAEA investigation could further complicate efforts by six world powers to negotiate a resolution to a wider, decade-old dispute with Iran and curb its nuclear work in exchange for a gradual ending of sanctions.

“In order to resolve all outstanding issues, past and present, it is very important that Iran continues to implement, in a timely manner, all practical measures agreed,” Amano told the U.N. agency’s 35-nation board of governors.

The phrase “past and present” refers to the IAEA’s long-running inquiry into suspicions, denied by Iran, that the country has worked on designing a nuclear weapon.

Iran has been promising to cooperate with the IAEA since Hassan Rouhani, seen as a pragmatist, was elected president last year. It says its nuclear program is a peaceful project designed solely to generate electricity.

The two issues that have not yet been addressed by Iran under a cooperation pact with the IAEA are alleged experiments on explosives that could be used for an atomic device and also studies related to calculating nuclear explosive yields.

Amano said Iran had “begun discussions” with the IAEA on the two measures but he gave no details. He also said the U.N. agency had asked Iran to propose future transparency steps to help advance the investigation, but that it had yet to do so.

In 2011, the IAEA published a report that included intelligence indicating Iran had a nuclear weapons research program that had been halted in 2003 when it came under increased international pressure. The intelligence suggested some activities may have resumed later.

Last month, Amano met Rouhani and senior Iranian officials in Tehran in an attempt to make progress and the IAEA chief told Monday’s board meeting that they had stated a “willingness to accelerate the resolution of all outstanding issues”.

Rouhani’s election raised hopes of a solution to the stand-off with the West after years of tension and fears of a new Middle East war. An interim accord was reached between Iran and the six powers in Geneva in November last year.

But Iran and the powers – the United States, France, Germany, Britain, Russia and China – did not meet a July target date for a comprehensive deal and now face a new deadline of Nov. 24, with talks due to resume in New York later this week.

Western officials say Iran must address the IAEA’s concerns and that, although there is no chance of the investigation being completed before the scheduled end of the six-power talks, some of the sanctions relief Iran is seeking would probably depend on its cooperation with the U.N. agency.

The IAEA is still not in a position to “conclude that all nuclear material in Iran is in peaceful activities”, Amano said.