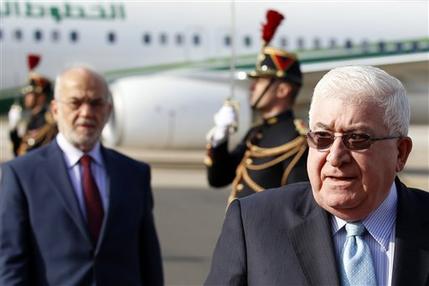 Iraq President Fouad Massoum, right, followed by Iraq Foreign Minister Ibrahim Al-Jaafari, left, arrive with Iraqi officials at Orly airport south of Paris, France, Sunday, Sept. 14, 2014 ahead of a conference with U.S. Secretary of State John Kerry, French President Francois Hollande and diplomats from around the world. The conference on Monday aimed at helping Iraq fight off extremists from the Islamist State group, with an added urgency following the release of a video showing the beheading of a British aid worker, the third Western hostage killed in recent weeks by the militants. (AP Photo/Francois Mori)

Tehran, Sept 15, IRNA – Iraqi President Fouad Massoum expressed regret that Iran was not invited to take part in the 26-nation anti-Daesh conference in Paris on Monday.

He made the remarks in an exclusive interview with Associated Press in Paris.

Iraq President also said that Egypt, the United Arab Emirates and Saudi Arabia do not need to join airstrikes against Daesh.

Iran has announced it is ready to provide its help to combat terrorism in Iraq and restore security to its neighboring country.

Late in August, French President Francois Hollande said Tehran could be an interlocutor on ways to deal with the threats posed by the Daesh terrorist group that is wreaking havoc on Iraq and Syria.

But a few days later, US Secretary of State John Kerry said Washington opposes Iran’s presence in the Paris conference.

Daesh is an offshoot of Al-Qaeda terrorist group that has taken control over large areas in western and northwestern parts of Iraq.

Iraqi army, volunteer forces and Kurdish Pishmarga have launched massive operations to liberate captured areas and wipe out terrorism and extremism from Iraq.

Ever since the escalation of the Daesh crisis in the Middle-Eastern country, Iran has voiced its full support for the Iraqi government and nation in their campaign against the foreign-backed terrorism.