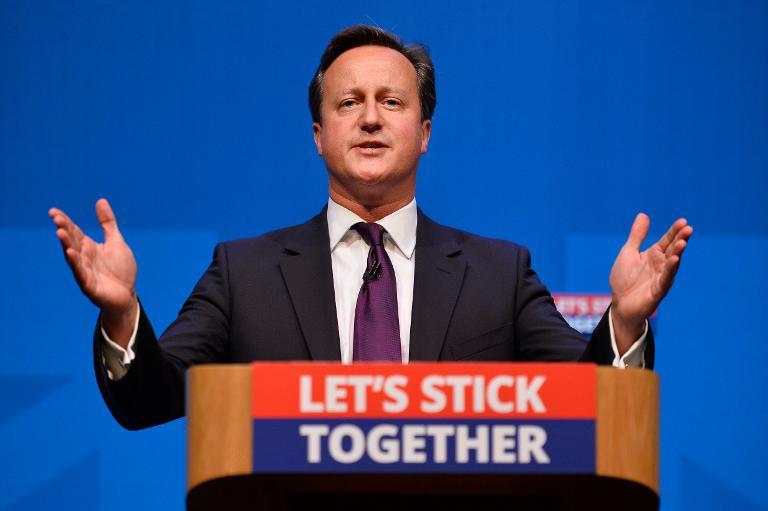 Aberdeen (United Kingdom) (AFP) – British Prime Minister David Cameron on Monday made a trip to Scotland to urge Scots to vote against independence and warned them of dire consequences otherwise in his most forceful speech yet ahead of this week’s historic referendum.

Cameron was speaking in Aberdeen on what could be his last visit to Scotland before the vote on Thursday and promised to give Scotland sweeping new powers in the event of a “No” result against independence.

“Head, heart and soul, we want you to stay,” Cameron said to applause from a mostly elderly audience of hundreds of people who were bussed in for the event in a city that is a hub for Scotland’s offshore oil and gas industry.

“Independence would not be a trial separation, it would be a painful divorce,” he warned.

A “Yes” victory would endanger pensions and put up a physical border between England and Scotland that “may not be so easily crossed,” he continued.

He said Scotland’s pro-independence government had outlined a future that was “too good to be true”, and added: “I don’t want the people of Scotland to be sold a dream that will disappear.”

“There is no going back from this”, he said.

A “Yes” win would be “the end of a country that all of us call home, and we built this home together”.

The United States has stepped into Scotland’s knife-edge debate by saying that it hoped to maintain its “special relationship” with a “united” Britain.

White House spokesman Josh Earnest stressed that Washington respected the right of Scots to decide their future in Thursday’s referendum, but hoped for a “strong, robust and united” ally.

The upped pressure to keep the United Kingdom together, though, was dismissed by 73-year-old Ron Fowlie, a Scottish resident handing out pro-independence leaflets in Aberdeen’s city centre.

He said he was “confident” of victory and stated: “We would like to run our own country.”

Asked about the opinion polls, he said: “It seems to be 50-50, so half of the population will be disappointed.”

Gilliam Wanterbberin, 39, who attended Cameron’s speech, was more sympathetic to the pro-unity stance. “He’s done a good thing in coming here and not staying in London,” he said.

With polls showing an extremely tight vote on Thursday, campaigners for and against keeping Scotland in the United Kingdom were pulling out all stops.

English football icon David Beckham lent his support to the “Better Together” camp and pro-UK campaigners held a rally in Trafalgar Square in London.

“This is about creating a more prosperous Scotland but also about creating a fairer society,” Salmond said, accusing Cameron of “orchestration” in getting other business leaders to come out against independence.

“People have got a once-in-a-lifetime opportunity in three days’ time to put Scotland’s future in Scotland’s hands,” he said.

Support for a “Yes” vote has grown in recent weeks. The campaign got a further boost on Sunday with top Scottish bands Franz Ferdinand and Mogwai playing a gig in the capital Edinburgh and encouraging Scots to cast ballots against the union.

“People are excited. The ‘Yes’ camp, I feel, are more invigorated,” Calum Forbes, a 22-year-old recent graduate and “Yes” supporter, said at the concert.

Three surveys published over the weekend put the pro-union campaign ahead by varying margins: 47 percent for “No” to 40.8 percent for “Yes” in a poll by Survation; 47.7 to 42.3 percent in an Opinium survey; and 47.1 to 46.1 percent in a Panelbase poll.

An ICM online poll for The Sunday Telegraph newspaper however gave the “Yes” camp 49 percent, ahead of the pro-UK camp at 42 percent with 9.0 percent undecided, although pollsters warned the sample size could be too small to be representative.

Campaigners for and against disagree over the economic impact of a “Yes” vote.

The “No” camp warns that independence would be a vote for uncertainty and a risk to living standards.

Economists too disagree about the consequences.

Nobel Prize winner Joseph Stiglitz dismissed the warnings as “fear-mongering”, arguing that the risks of UK leaving the European Union were “significantly greater”.