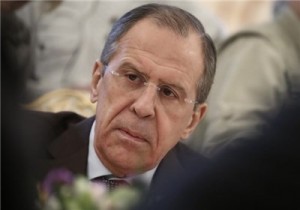 “NATO expects to turn as many countries as possible into its member states, and expand to Russian borders — that’s unacceptable,” Lavrov said in an interview aired by Moscow’s TVC on Saturday.

“We expect every country to comply with the agreements of ensuring indivisible and overall security in the Euro-Atlantic region, among which the assurances of NATO not expanding eastward play a decisive role,” the RIA Novosti news agency quoted the top diplomat as saying.

Lavrov stressed that the nonaligned status of Ukraine, enshrined in Ukrainian Constitution, is a matter of principle for Russia.

“We are convinced that Kiev’s choice (of remaining nonaligned) is in the interests of its people and the legitimate interests of all its neighbors and partners, as well as to protect security of the Euro-Atlantic region,” Lavrov said.

On Sept. 3, Ukrainian Prime Minister Arseny Yatsenyuk called on the parliament to promptly pass a bill on the abolishment of the nonaligned status of Ukraine to pave the way for the restoration of the country’s course towards NATO membership.

Lavrov said that Yatsenyuk and “some other politicians” who earlier made similar suggestions had been acting “not in the interests of their own people but of those seeking to cause a split between Ukraine and Russia and drive a huge wedge between Russia and Europe.”

Lavrov claimed the initiative came from “first of all Washington.” “The US does not even try to conceal its intention, ” he said.

Russian President Vladimir Putin on Wednesday blamed Western countries for provoking the Ukraine crisis, of which he said the West has taken advantage to resuscitate NATO, and vowed to take measures to strengthen Moscow’s military power against emerging security threats, Xinhua reported.

US President Barack Obama said last Friday at a NATO summit in Wales that all NATO allies would provide security assistance to Ukraine, which includes non-lethal support to the Ukrainian military as well as assistance to help modernize Ukrainian forces, including logistics and command and control.

A communique issued after the summit committed NATO to a continuous military presence in eastern Europe with units rotated through the area.