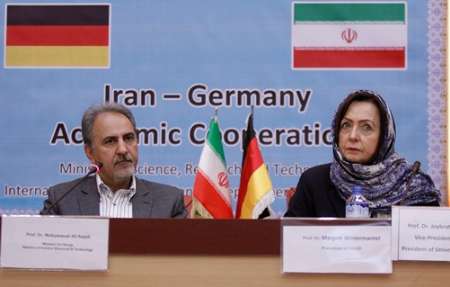 Tehran, Sept 14, IRNA – Academic officials from Iran and Germany, in a meeting on Sunday, explored ways to expand bilateral cooperation in scientific and technological domains.

During the meeting, Caretaker of Iran’s Ministry of Science, Research and Technology Mohammad-Ali Najafi and President of the German Academic Exchange Service, Prof. Dr. Margret Wintermantel, who is in Tehran at the head of a delegation, called for extensive cooperation between Iranian and German universities.

Najafi described Iran and Germany as two countries playing a significant role in formation of human civilization with deep-rooted systems of education.

He underlined the necessity of establishing sustainable and long-term cultural cooperation between Iran and Germany.

Meanwhile, the head of the German delegation, said that the visit indicates her country’s interest in enhancing scientific and technological cooperation with Iran.

Prof. Wintermantel said she believed enhanced scientific cooperation between the two nations helps both Iran and Germany develop a better understanding of each other.