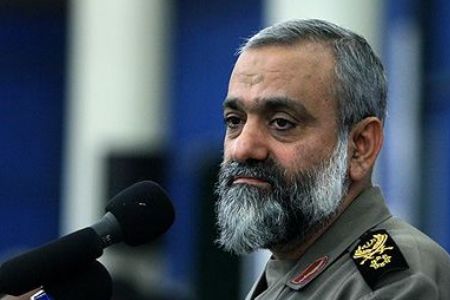 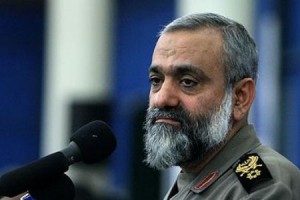 TEHRAN (FNA)- Commander of Iran’s Basij (volunteer) force Brigadier General Mohammad Reza Naqdi said the Islamic State of Iraq and the Levant (ISIL) is under the command of the White House and has been created to implement the US plots in the region.

“The command center of the ISIL is in the White House; the US itself has created this cancerous tumor and deflected stream in the region, and its plan to fight the ISIL is also the continuation of the same evil plot that it has pursued so far,” Naqdi said, addressing a ceremony in the Central province of Yazd on Sunday.

He elaborated on the US goals of creating the ISIL, and said the first goal is displaying a fake face of Islam, which has been attained by the ISIL’s inhuman and savage crimes in the region and releasing their images and footages in the world media; the second goal is sowing discord among the Shiites and Sunnis; the third and most important goal of the US is preventing the spread of the Islamic Revolution in the world and its recruitment of anti-arrogance forces.

Naqdi described another goal of Washington as preparing the ground for the US military intervention and deployment of its forces in the Middle-East.

Naqdi had also earlier lashed out at the US and Israel for sponsoring the ISIL.

“The criminal US created, equipped and armed the ISIL terrorist group with the help of the wicked Britain and the child-killing Zionist regime as well the petrodollars of oil-rich countries and they ordered it (ISIL) to carry out crimes and large-scale massacre of Shiites and Sunnis and disrupt their tranquility on the pretext of a sectarian Sunni war on Shiites,” General Naqdi said, addressing a gathering of thousands of Basijis in Lorestan province on Wednesday.

He noted that the western countries wanted to introduce a tainted image of Islam to the world by displaying horrible crimes and savage wickedness against children, women and innocent people with extreme brutality and savagery in a bid to harness the huge waves of Islamism and tendency for Islam in the world, specially the western countries.

General Naqdi reiterated that the arrogant powers had created the ISIL and every now and then they attacked the terrorists to portray that they were fighting terrorism while the American, British and Israeli military advisors were supporting them in the battlefield.

“The outcome of the actions of this terrorist current in Syria was unprecedented as it caused people’s high turnout in that country’s presidential election, which set as yet another example of the inefficiency of weapons and the victory of the resistance movement against the global arrogance,” he added.