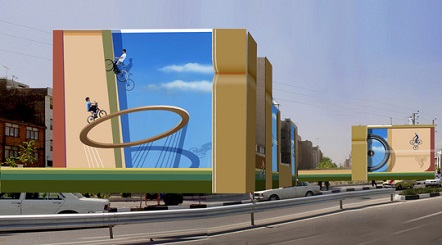 TEHRAN, Sep. 13 (MNA) – Mehdi Ghadyanloo is an Iranian street artist that has been beautifying Tehran with surreal street art that he paints on the walls.

Sanctioned — and even supported — by the municipality, Ghadyanloo’s works are more concerned with beautifying Tehran through his whimsical images, which have garnered countless fans in Iran and around the world.

“Most of my large-scale work is financed by the municipality,” he said in an interview with Young Persian Artists, “Some years ago, the municipality set up a committee to help promote mural art in Tehran. I think the municipality really felt the need to bring some cohesion or at least color to the often confused and smog-smeared architectural face of the city.”

His style is surreal and the works depict imageries on a hyper-reality scale. Images such as a child riding a bicycle down the side of a building, or cars and motorcycles flying in the sky will stop people in their tracks as they gaze up at the paintings, transfixed.

These are just some of the surreal scenes that Iranian street artist Mehdi Ghadyanloo has painted onto the sides of buildings in Tehran.

Ghadyanloo teaches a course on mural art at Soodeh University and is preparing an exhibition at Galleri Geo in Bergen, Norway. His murals act like optical illusions, almost making the viewer believe they’re really looking at flying cars and other physical impossibilities.

Ghadyanloo has a master degree in animation; yet, what led him to become a muralist he attributes to his professor, Dr. Kafshchian, who passed on to him his passion for large scale mural work.