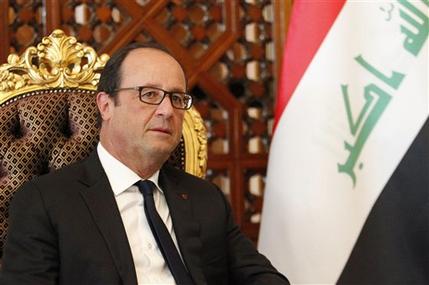 French President Francois Hollande is seen after his arrival at Baghdad Airport in Baghdad, Iraq, Friday, Sept. 12, 2014. Hollande expressed his solidarity with Iraq on a visit to Baghdad on Friday, as his country prepares for possible airstrikes with a U.S.-led coalition against extremists who have seized territory around the region. (AP Photo/Thaier Al-Sudani, Pool)

PARIS (AP) — France is prepared to invite Iran to an international conference Monday aimed at coordinating actions to knock out the Islamic State extremists in Iraq – even though that runs counter to the U.S. refusal to deal with Tehran.

The position reflects a recent shift in France’s policy toward Iran, a Shiite Muslim nation and neighbor of Iraq that joins regional states and the West in adamantly opposing the advance of the radicals. Tehran’s long-time influence, including at times a military presence, in Shiite-majority Iraq makes it a logical partner in France’s eyes.

A French official helping to plan the conference says the only hitch is agreeing with partners, but added “we are not far from a consensus.” The official, who was not authorized to be publicly named, didn’t elaborate.

U.S. Secretary of State John Kerry made the American position clear Wednesday in Baghdad. “The United States does not cooperate, militarily or otherwise, nor does it have any intention in this process of doing so with Iran,” he said.

Iran is embroiled in a nuclear dispute with the international community which fears Tehran’s nuclear capabilities will be used to make weapons. But French President Francois Hollande says that is a separate issue.

France has staked a tough stance in the nuclear dispute, but is viewing Iranian help in the region with pragmatism, stressing the overlapping concerns of Iraq, Iran and the West about the dangers posed by the Islamic State group. Paris believes Tehran should not be excluded from the effort to crush the radicals who now control a wide swath of Iraq.

France began arming Kurdish fighters against the Islamic State group last month and is ready to carry out airstrikes, like the United States. There has been no overt talk about extending Iran’s role beyond the conference table.

Iran’s ambassador to Iraq, Hassan Danaee, said Friday that Iran would be happy to participate in the Paris conference since it has a great interest in the stabilization of Iraq. He added that Iran is prepared to offer any support to its neighbor and hopes the conference will yield successful results.