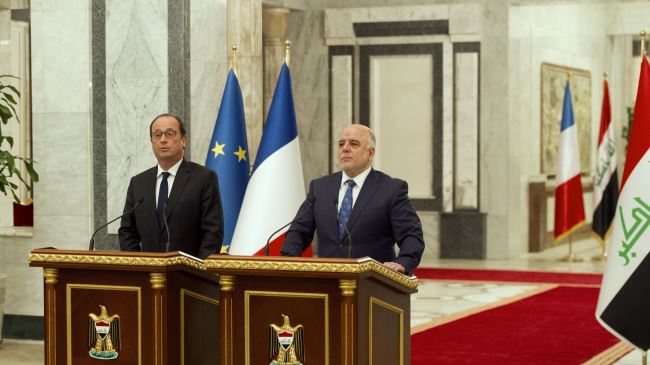 French President Francois Hollande says his country is willing to step up military assistance against the Takfiri ISIL terrorists operating in Iraq.

Hollande, who is in Iraq on an unannounced one-day visit, said Paris is ready to extend even more military support to Iraq to battle the ISIL and its affiliated groups.

“I came here to Baghdad to state France’s availability in providing even more military assistance to Iraq,” he said at a joint news conference with Iraqi Prime Minister Haider al-Abadi in Baghdad on Friday.

The French president arrived in Baghdad on Friday morning in what is seen as part of efforts to support the Iraqi government in the battle against the ISIL terrorists.

Hollande later travelled to the northern Kurdish city of Erbil for talks with the officials of the Kurdistan Regional Government over combating ISIL.

The Takfiri ISIL terrorists currently control parts of eastern Syria and Iraq’s northern and western regions. They have committed heinous crimes and threatened all communities, including Shias, Sunnis, Kurds, Christians and Izadi Kurds, during their advances in Iraq.

The US and European officials have recently voiced concern that militants in Syria and Iraq may bite the hand that feeds them.

The brutal beheadings of American journalists by ISIL are the latest and the most shocking example of foreign militants threatening Western interests.

According to reports, nearly 900 French citizens are now operating with extremist groups in Iraq and Syria. Security officials have warned that the number of French youths leaving the country for the conflict zones continues to grow. Authorities fear that the European militants will use their combat skills against their countries upon returning home.

The terrorist group has links with Saudi intelligence, and is believed to be supported by the Israeli regime.