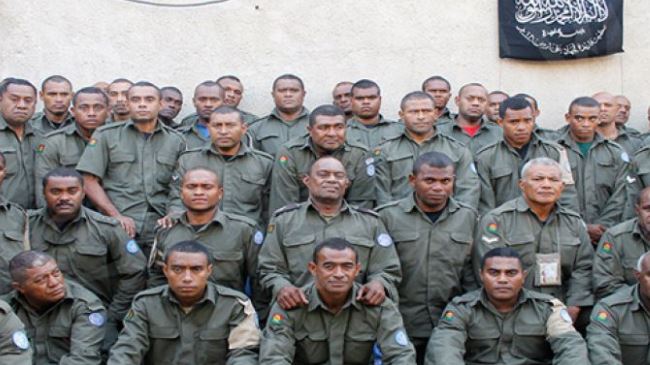 An al-Qaeda-linked group in Syria has released a video in which it says it will free a group of Fijian UN peacekeepers it kidnapped in the occupied Golan Heights.

In the video, which emerged online late Wednesday, the al-Nusra Front terrorists said they had consulted their leaders and they had been advised that “we should release these prisoners.”

A Fijian peacekeeper also spoke in the footage, saying that the foreign-backed militant group had vowed to release the 45 peacekeepers.

“It is Tuesday, the ninth of September, I would like to mention to you that it is a very happy day. We have been informed that we will be released soon and we are all very happy to be going home,” the peacekeeper said.

He also thanked the militant group for “keeping us safe and keeping us alive,” and said all troops are safe and alive.

“I would like to assure you that we have not been harmed in any way,” he added.

The militant group had initially made various demands to free the peacekeepers, including being removed from the UN’s list of terrorist organizations and the release of its members from prisons.

The Fijians are part of the UN Disengagement Observer Force (UNDOF), stationed in the Golan Heights since 1974 to monitor a ceasefire between Israel and Syria.

They were abducted two weeks ago after al-Nusra militants attacked the Quneitra crossing.