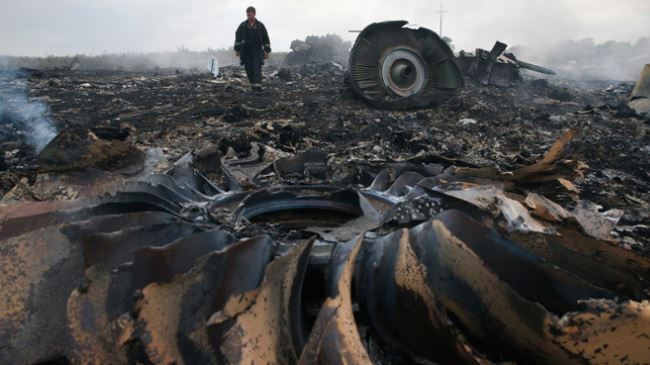 A Ukrainian Emergencies Ministry member walks at a site of a Malaysia Airlines Boeing 777 plane crash near the settlement of Grabovo in the Donetsk region, July 17, 2014.

A senior Russian diplomat has seriously questioned the newly released Dutch investigation report on the crash of Malaysia Airlines Flight MH17 in eastern Ukraine, demanding a “truly” international probe into the incident.

“It is very hard to call this investigation a truly international one. Many questions have been left unanswered. There are too many omissions,” said Russia’s UN Ambassador Vitaly Churkin in a Wednesday interview with the Rossiya-24 channel.

The report, released by the Dutch Safety Board (DSB) on Tuesday, said that the Malaysian Boeing-777 crash was the result of structural damage caused by a large number of high-energy objects that struck it from the outside.

The Dutch report “did little to advance our understanding of what happened,” only confirming what was already known before, Churkin emphasized.

According to Churkin, Dutch investigators have also completely ignored the issue of at least one Ukrainian warplane that reportedly was in midair near the Malaysian plane when the disaster occurred on July 17.

It also looks “very strange” that the text of the DSB report doesn’t say a word about the UN Security Council’s resolution on MH17, the envoy said.

“This resolution speaks about the need for conducting a thorough independent international investigation, not to mention the fact that it contains an important provision about the cease-fire in the area of the crash,” he explained.

With so many blank spots, Russia would like to see more transparency and less “mystery” surrounding the investigation, Churkin added.

All the 298 people aboard the Malaysia Airlines jet died as it crashed in Ukraine’s Donetsk region on July 17. The majority of those on the plane – which was allegedly shot down – were citizens of the Netherlands.