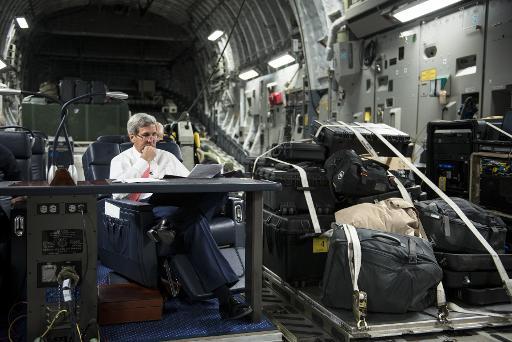 Kerry to rally Arab support after Obama vows to hit IS

Kerry to rally Arab support after Obama vows to hit IS

Jeddah (Saudi Arabia) (AFP) – US Secretary of State John Kerry arrived in the Saudi city of Jeddah on Thursday to shore up Arab support after President Barack Obama ordered a “relentless” campaign against Islamic State (IS) jihadists including air strikes in Syria.

The top US diplomat, touring the Middle East to establish a coalition of more than 40 countries, is to meet with counterparts from 10 key Arab nations and Turkey on measures to defeat the jihadists in Iraq and Syria.

Outlining the new US strategy, Obama pledged to expand US military operations against IS — also known as ISIL — a radical Islamist group that has seized a swathe of Iraq and Syria and committed horrifying atrocities.

Speaking in a prime-time television address, the US president said: “Our objective is clear: we will degrade, and ultimately destroy, ISIL through a comprehensive and sustained counter-terrorism strategy.”

“I will not hesitate to take action against ISIL in Syria, as well as Iraq,” he added.

Steeling his nation for another foreign conflict, Obama announced the dispatch of another 475 military personnel to help train Iraqi forces to take on the Islamic State, bringing the total number of US troops in the country to 1,600.

But he made clear in the 14-minute address that the new campaign will not be a repeat of the exhausting ground wars fought by US troops in the past decade.

“I want the American people to understand how this effort will be different from the wars in Iraq and Afghanistan,” Obama said, speaking on the eve of the anniversary of the September 11 attacks in 2001.

“It will not involve American combat troops fighting on foreign soil.”

Washington is instead looking to empower partners on the ground such as the Iraqi forces, Kurdish fighters and Syrian rebels, to fill in territory opened up by US air power.

Key to that strategy will be improving the effectiveness of Syrian rebels, and Obama called on Congress to swiftly authorise an operation to train and equip moderate Syrian fighters.

Kerry is seeking crucial backing for the US campaign in Jeddah, meeting with his counterparts from the oil-rich Gulf monarchies, Lebanon, Egypt, Iraq, Jordan and NATO member Turkey.

“Many of the countries are already taking action against ISIL,” a State Department official said.

“But the trip by the Secretary is going to broaden the coalition and bring it into more focus and intensify the lines of effort.”

The official said Saudi Arabia would be especially important to the effort “because of their size and economic importance but also because of their religious significance with Sunnis.”

The “train and equip programme” for Syria’s rebels would be a particular talking point with the Saudis, the official added.

The opposition National Coalition said it had “long called” for action against IS and “warned time and again of the growing threat of this extremist group”.

“We urge the US Congress to approve the president’s policy as soon as possible, and allow the training and equipping of the Free Syrian Army,” it said.

The moderate Free Syrian Army “can succeed, but it needs the necessary support that would enable it to form a reliable and well-equipped force,” the Syrian Coalition added.

It warned however that it was key to “realise that the Assad regime represents the root cause of the violence, brutality and sense of impunity prevailing in Syria”.

There was no immediate reaction from Assad’s regime to the US threat of carrying out strikes on its territory.

Assad was to hold talks Thursday with the new UN envoy on the Syrian conflict, Staffan de Mistura, who was on his first visit to Damascus.

The growing threat from IS was made clear after the group seized large parts of Iraq in a lightning offensive in June, sweeping aside ineffective Iraqi forces.

It declared an Islamic caliphate in parts of Syria and Iraq under its control and has been accused of widespread atrocities, including beheadings, crucifixions, rapes and selling women into slavery.

Two captive US journalists, James Foley and Steven Sotloff, were beheaded in recent weeks in videos released by the jihadists.

Kerry made an unannounced stopover on Wednesday in Baghdad where he expressed support for the new government of Prime Minister Haidar al-Abadi, a Shiite regarded as far less divisive than his predecessor Nuri al-Maliki, who was criticised for driving many in the Sunni minority into the arms of IS.

French President Francois Hollande will also head to Iraq on Friday for talks ahead of an international conference on Iraqi peace and security that Paris will host on Monday.