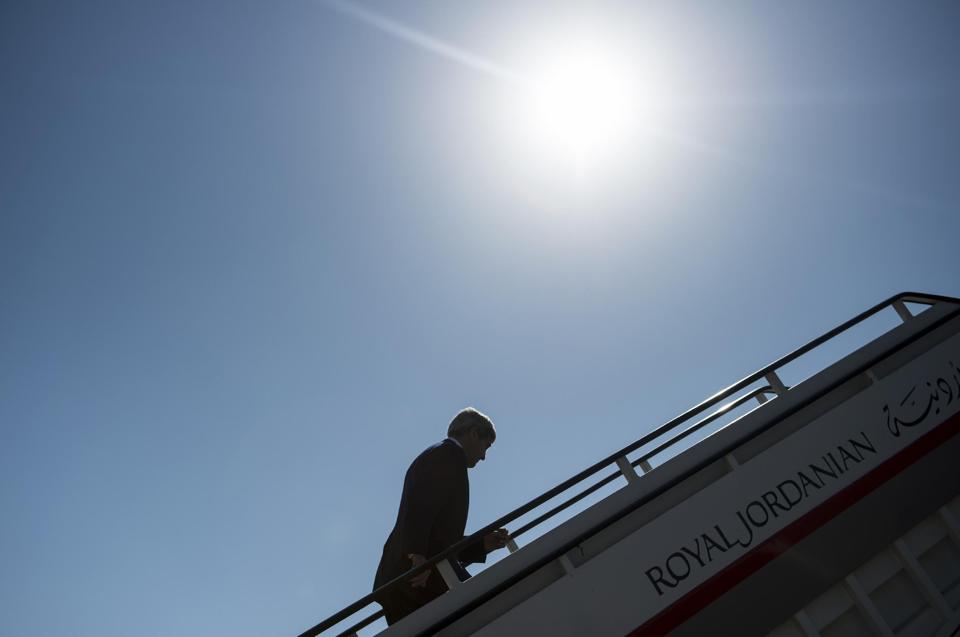 US Secretary of State John Kerry boards his plane at Queen Alia Airport in Amman on September 11, 2014 as he travels to Saudi Arabia (AFP Photo/Brendan Smialowski)

Ankara (AFP) – US Secretary of State John Kerry is to fly to Ankara Friday for urgent talks after Turkey refused to allow a US-led coalition to use its air bases to attack jihadists in neighbouring Iraq and Syria.

Turkey, Washington’s key ally in the region and the only Muslim member of the core 10-nation coalition against the Islamic State, is also refusing to take part in combat operations against the militants, a government official told AFP Thursday.

Kerry will meet with Turkish President Recep Tayyip Erdogan and its new prime minister Ahmet Davutoglu Friday in the hope of shoring up support for air strikes.

But on the eve of the visit, a Turkish official told AFP, “Turkey will not be involved in any armed operation but will entirely concentrate on humanitarian operations.”

“Incirlik will be used only for logistical purposes and humanitarian assistance”, said the source, referring to a southern air base used for NATO operations in Iraq.

The decision echoes Turkey’s refusal to act as a launch pad for the US invasion to oust Saddam Hussein in 2003, which triggered a crisis between the allies.

Turkey — and in particular the former foreign policy chief Davutoglu — has come under fire for indirectly encouraging the formation of the Islamic State because of its support of Islamist opponents of Syrian President Bashar Al-Assad, and its loose control of its borders.

But Ankara vehemently denies its strategy has backfired.

Kerry — who had talks in Saudi Arabia on Thursday — is on a regional tour to drum up support from 10 key Arab nations and Turkey, following President Barack Obama’s announcement of an offensive against Islamic State jihadists that will include air strikes in Syria.

The Turkish foreign ministry confirmed that Kerry would meet all of Turkey’s key decision makers.

“In these meetings, bilateral, regional and global issues on our joint agenda, as well as opportunities for further developing our relations and cooperation will be elaborated on,” it said in a statement.

After a lightning advance, IS militants now control swathes of Iraq and much of northern Syria along the Turkish border.

Turkey sees itself a victim of the IS with Islamist militants holding 49 Turks hostage, including diplomats and children, abducted from the Turkish consulate in Mosul in Iraq on June 11.

Ankara is therefore reluctant to take a stronger role in the coalition, fearful of aggravating the hostage situation.

“Our hands and arms are tied because of the hostages,” the official told AFP.

“Turkey will not take part in any combat mission, nor supply weapons.”

US Secretary of Defence Chuck Hagel held closed-door talks with Turkish officials in Ankara on Monday where the government raised fears that weapons sent by Western countries to forces fighting IS in Iraq could end up in the hands of Kurdish separatist rebels.

The Kurdistan Workers’ Party (PKK), branded a terrorist organisation by Turkey and its Western allies, has joined forces with other Kurdish units in the US-backed operation to halt the advance of IS militants in Syria and Iraq.

“We have ongoing concerns which were conveyed to Hagel,” the source said.

Turkey’s role in stopping the flow of foreign fighters to Syria and Iraq has also come under spotlight, but the official said the West had to share intelligence that would allow for their capture.

“Turkey is a country that receives 35 million tourists annually,” the official told AFP.

“Unless the West shares intelligence, we cannot send back anyone just because we don’t like their appearance. Intelligence sharing is our number-one priority.”

Turkey has thus far deported 850 foreign fighters since 2011, according to the official who strongly rebutted criticisms that Turkey was failing to secure its porous border with Syria and Iraq.

“The West’s Syria policy has collapsed and Turkey is being portrayed as a scapegoat,” the official said.

“It is a long, mountainous border which makes it difficult to protect. If we could we would prevent PKK fighters in Iraq from penetrating into Turkish soil.”

Turkey has stepped up border security with surveillance towers, thermal cameras and night-vision systems, according to the official.

The government source also said Turkey’s backing of the Syrian opposition was a necessary strategy to ward off jihadists.

“We have been saying since the very first day that radicals will be bolstered if the opposition is not supported.”