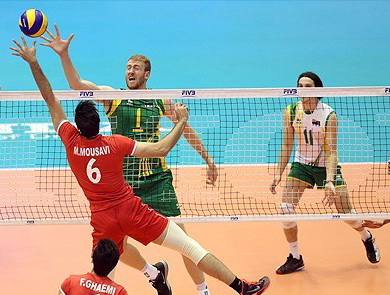 Head coach Slobodan Kovac’s mighty Iranian volleyball players managed to win the 1st, 3rd and 4th sets of the game respectively 25-23, 25-21 and 25-17, but lost the third set 25-21 to the Australians whose average height was more than 10 centimeters higher than them and their age some two years younger, but their FIVB ranking, world 12th, just one step below the Iranians.

The Iranian athlete national volleyball players had in the preliminary round of the 2014 Poland FIVB Men’s World Championship gained four victories versus the world champion USA, prestigious Italy, Belgium and Porto Rico, and yielded to defeat only before France.

But the Australians had only two victories versus Cameron and Venezuela, but three defeats before Argentina, Serbia and home team, Poland, and therefore had to win all their games to rise to the final round of the games.

The Iranian national side’s next competition in these world class games will be on Thursday evening, 7:30 versus their former head coach Julio Vellasco’s national Argentina volleyball team.