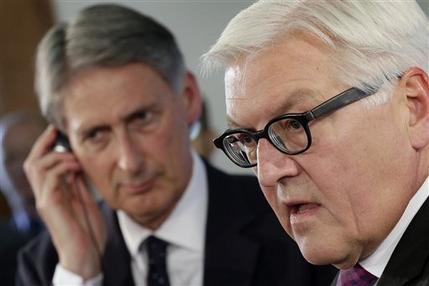 BERLIN (AP) — Britain won’t participate in any airstrikes on Syria but otherwise is ruling nothing out as it considers how to support President Barack Obama’s plan to root out the Islamic State group, the British foreign secretary said Thursday.

Obama on Wednesday authorized U.S. airstrikes inside Syria for the first time, along with expanded strikes in Iraq as part of “a steady, relentless effort” to root out the extremists.

“Britain will not be taking part in any airstrikes in Syria,” Foreign Secretary Philip Hammond said in Berlin. He said London won’t be “revisiting” the issue after Parliament decided last year against participating in airstrikes.

Germany has decided to arm Kurdish forces fighting extremists, putting aside its usual reluctance to send weapons into conflicts. Asked about participating in airstrikes, German Foreign Minister Frank-Walter Steinmeier said: “We have neither been asked to do that, nor will we do that.”

Hammond said British officials “will look very carefully at the U.S.-led plan, and we will look at how the U.K. can best contribute to that plan, ruling nothing out at this stage.”

Both ministers said a regional alliance is needed against Islamic State fighters, but they made no new commitments.

France has invited officials from Europe, the U.S., the Arab region and Russia to meet in Paris on Monday to discuss strategy against the group. Steinmeier has invited his Group of Seven counterparts to discuss the issue on the sidelines of the U.N. General Assembly in New York later this month.

Asked whether Iran needs to be involved in the drive to stabilize Iraq and Syria, Steinmeier said he has long made clear that “in the long run, Iran’s participation will be unavoidable” in resolving Syria’s conflict.

Hammond said that “the Iranians have shown themselves willing to engage pragmatically” in Iraq, although differences with the West over its nuclear program persist.

The Middle East is complex and “there will be shifting patterns of cooperation around different issues, but I hope we will all see over the coming months a sustained improvement in relations with Iran,” he said.