US will ‘deepen, broaden’ sanctions against Russia: State Department 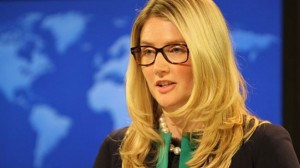 The US is preparing to “deepen and broaden” the sanctions it has imposed on Russia over what it calls Moscow’s intervention in Ukraine’s ongoing crisis.

US State Department spokesperson Marie Harf said Tuesday Washington will make its judgment on whether to impose new sanctions on the basis of what will happen in Ukraine in the next few days.

“The United States is finalizing measures to both deepen and broaden our sanctions across Russia’s financial, energy and defense sectors,” Harf told reporters.

“We are finalizing these packages, but we are going to make decisions based on what’s happening on the ground in the next few days,” she added.

Earlier in the week, the European Union formally adopted new sanctions on Russia, but delayed their implementation to assess the ceasefire.

The West and Russia have been at loggerheads over the political situation in Ukraine after pro-Western forces ousted the country’s president Viktor Yanukovych in February 2014.

Moscow has long denied involvement in Ukraine’s crisis and has warned of an asymmetrical response if more sanctions are implemented. In August, Russia introduced a year-long ban on certain food imports from the European Union, the United States, Canada, Australia and Norway.