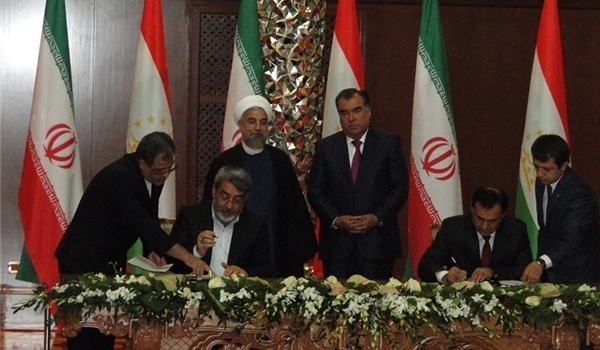 President Rouhani left Tehran for a bi-nation tour of Central Asia on Monday. On the first leg of his tour, the president visited Kazakhstan, where he met senior officials of the Central Asian nation and signed several cooperation agreements.The Iranian President then left Astana for Dushanbe on Wednesday morning to attend the 14th summit of the Shanghai Cooperation Organization (SCO) and discuss bilateral ties with participants in the high-profile meeting.

Rouhani is also due to inaugurate phase-II of the Sangtoudeh-II Dam and Power Plant in Tajikistan, which has been constructed through Iran’s major partnership.

The Iranian president is accompanied by a high-ranking political and economic delegation, including a number of cabinet members.

Upon arrival in the Tajik capital earlier today, President Rouhani called for the further expansion of economic relations between Tehran and Dushanbe.

“Iran and Tajikistan can expand their relations in all areas, specially in economic fields,” President Rouhani said on Wednesday.

He noted that Iranian companies can strengthen Iran-Tajikistan relations by investing in Tajikistan.

“The two countries mostly have common views on regional issues, and this can help consolidate the bilateral relations,” the Iranian president added.