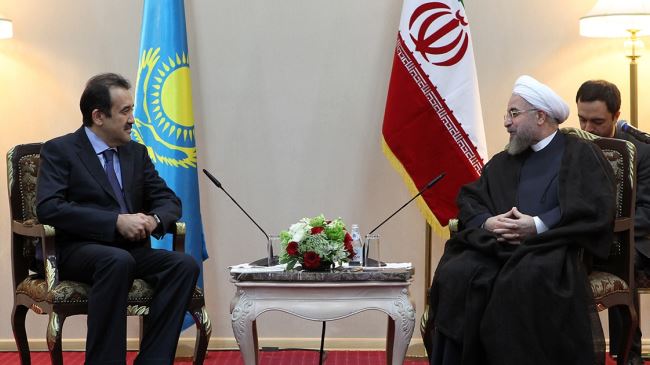 “The policy of the Islamic Republic of Iran’s government is [based on] close interaction and relations with regional countries and particularly with neighboring states. Kazakhstan has a special position among them,” Rouhani said in a meeting with Kazakh Prime Minister Karim Massimov in Astana on Tuesday.

He added that the annual value of exchanges between Tehran and Astana currently stands at one billion dollars which indicates that the two sides have so far failed to make proper use of bilateral capabilities to increase the figure.

He noted that the implementation of agreements signed between the two countries would lead to a great development in mutual ties and even in the region, saying Iran is determined to implement the deals.

“Undoubtedly, the expansion of cooperation in various sectors including transportation, the Caspian Sea, joint venture, industry and the environment is very important and I hope that joint cooperation will also be developed in the fields of culture, science and technology,” Rouhani said.

The Kazakh premier, for his part, said Astana is keen to increase trade exchanges with Iran, expressing hope that the Iran-Turkmenistan-Kazakhstan railway would pave the way for achieving this goal.

Massimov also hoped that negotiations between Iran and the P5+1 on the Islamic Republic’s nuclear energy program would lead to positive outcomes and sanctions against Tehran would be lifted.

The Iranian president wrapped up his official two-day visit to Astana on Wednesday after he held talks with senior Kazakh officials on the first leg of his five-day tour of the Central Asian states of Kazakhstan and Tajikistan.

President Rouhani traveled to Tajikistan for a three-day visit on Wednesday, to participate at the summit of the Shanghai Cooperation Organization (SCO).