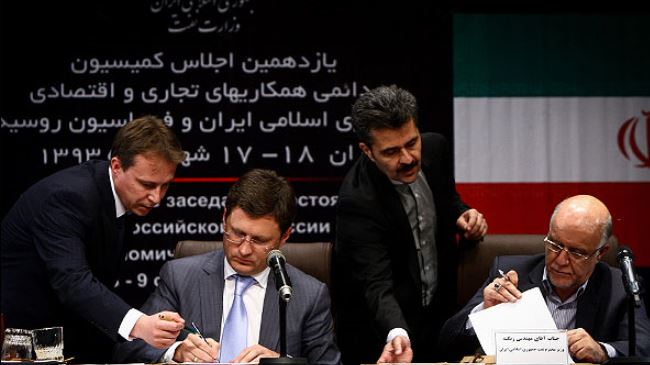 Facing continued pressure on its economy, new US sanctions, and the prospect of no comprehensive nuclear agreement, Iran has indicated a way to prevent decline — alliance with Russia.

Speaking after Tuesday’s three-hour talks in Tehran on Iran-Russia trade cooperation, Oil Minister Bijan Namdar Zanganeh declared that trade can skyrocket: “In 1392 (March 2013-March 2014), the volume of bilateral trade between the two countries amounted to $1.5 billion, which has the capacity to be increased to more than 10 times through efforts.”

Zanganeh continued, “We can provide Russia with a wide range of commodities and services they may not have access to due to (Western) illegal sanctions. We will sign a memorandum of understanding today with an eye to finalizing the bilateral trade deal.”

Russian Energy Minister Alexander Novak said, “This event is a milestone in Russian-Iranian commercial relations, which will facilitate trade between the two countries.”

It remains to be seen if Zanganeh’s rhetoric can translate into results. Last month, a proposed oil-for-barter deal — reportedly worth $1.5 billion/month — collapsed within hours of the signature of a five-year memorandum of understanding by Zanganeh and Novak.

The two men signed four general Memoranda on Tuesday for cooperation in industry and in oil, gas, petrochemical, and mining sectors.

Iranian Energy Minister Hamid Chitchian said Russia has agreed to build eight thermal power plants in Iran, worth more than $10 billion, and to renovate other plants.