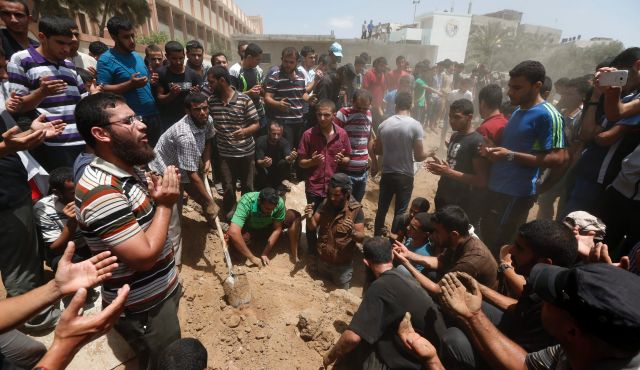 Palestinians offer their prayers over the grave of a member of the al-Batsh family. Gaza City on Sunday, July 13, 2014. Photo by AP

Military prosecutor orders the investigate police unit to look into cases of alleged misconduct and breach of international war, decides against probing other questionable cases.

Chief Military Prosecutor Dani Efroni has ordered the Israel Defense Forces’ investigative police unit to open criminal investigations into five separate cases of army conduct during the operation in the Gaza Strip over the summer.

The cases include the bombing of a Gaza beach, in which four children were killed; the strike on a United Nations school in Beit Hanun on July 24, in which 14 Palestinians were killed; the case of a 17-year-old who was arrested by IDF in the Khuzaa region and claims to have been used by soldiers as a human shield; the case of a Palestinian women who was shot dead by IDF troops in Dahaniyeh after her exit from the fighting zone was coordinated with soldiers in advance; and a fifth case involving suspected looting by a Golani Brigade soldier, who allegedly stole a sum of money from a house in Shujaiyeh.

Major General Efroni has decided, as of now, not to open investigations into seven additional cases, including the strike on the Koareh family home in Khan Yunis on July 8, which was carried out during the ‘knock on roof’ warning procedure, while the residents were still inside. The military prosecutor found that in that case, it would have been impossible to divert the missile and that it was not suspect to breach of international law.

He reached the same conclusion in another case, in which a vehicle reportedly carrying a local Gaza reporter was attacked in an aerial strike. The Military Prosecution said that the vehicle was hit after the army received intelligence information that it contained weapons and a terrorist. Major General Efroni is also currently investigating whether to order a probe into the strike on the Al-Batsh home in Gaza City, in which 18 members of the family were killed.