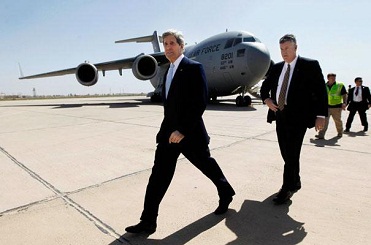 9 killed in 3 bombings as Kerry arrives in Baghdad

John Kerry, US Secretary of State, arrived in Baghdad on Wednesday to support new Prime Minister Heider al-Ebadi’s government and hold talks about the strategy in fighting ISIL to be unveiled by President Barack Obama.

Kerry’s unannounced talks in Baghdad were the first stop on a regional tour to build support for the new US strategy which he has said will only work with the backing of the “broadest possible coalition of partners around the globe.”

He will fly on to Saudi Arabia for talks on Thursday with 11 regional foreign ministers on a joint campaign against ISIL.

The US administration has come under mounting domestic and international criticism for not taking stronger action against ISIL fighters who have committed a spate of atrocities in recent weeks, many of them paraded on the Internet.

In his meeting with Iraqi new Prime Minister Heidar al-Ebadi, US Secretary of State Kerryhailed the new government and said it has “the potential to unite all of Iraq’s diverse communities”.

Later on Wednesday, US President Obama will deliver a policy speech on ISIL in Iraq adn Syria. Behading of two American hostage journalists by ISIL, is believed to have provided pretext for the United States to deploy troops in Bashar al-Assad’s Syria.