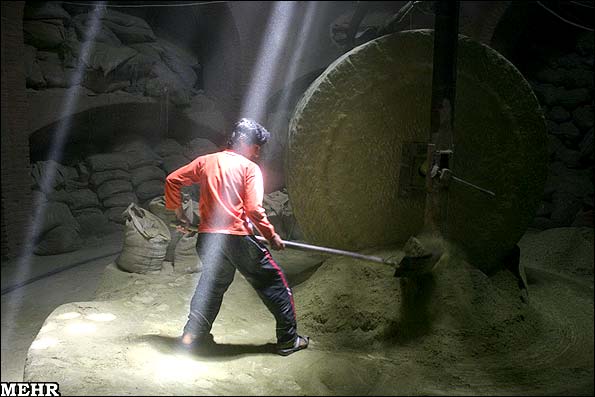 YAZD, Sep. 09 (MNA) – Henna grinding profession (‘mazari’) has a long history in Yazd which is still practiced in traditional bazaar of the city.

Henna grinding is a 700-year-old profession still practiced in traditional bazaar of the city. Many old professions had been long forlorn, but the profession now supplying the best and popular henna to Iran and Persian Gulf countries is still alive in the dark, dim-lit cells of the bazaar, where the mazars (which means ‘to move wheel’ in local dialect) prefer their traditional means of the job.

A street in Yazd hosts the traditional industry, and every tourist would find the street easily to buy the city’s souvenir.

Mehr News local correspondent interviewed Mahnaz Sadeqi a researcher and expert in popular culture to find out more about the profession. “The local traders introduced henna to India, Pakistan and Persian Gulf countries. This brought a boom to local henna grinding industry as one of the main professions, and with it, Yazd henna found fame in these countries,” Sadeqi says, “henna leaves were introduced to Yazd to be ground; however, the processing and packaging of henna made Yazd famous globally.”

“In the course of their travels, the same traders introduced unground spices such as pepper, cinnamon, and ginger, adding to the ground items by mazars,” adds Sadeqi. “Through centuries, Yazd mazars still prefer their old style of henna grinding using a traditional millstone which ground henna leaves and was derived by donkey. The millstone was carved in a workshop near Mehriz hills,” she tells Mehr News local correspondent.

We walk to the mazars’ block, also called ‘mazars’ passageway,’ and the fragrance of ground henna invites us inside. This is the most famous such passageway, and tourists would not need to ask for address where to find the species. The cells are dim-lit by a ray of sunlight infiltrating through a window on the roof of the mills.

A platform, about less than half a meter high, is the bed where henna leaves are ground by a millstone derived by powerful men, camels, and other animals. Unground henna is stored in cells directly connected to the mill. Other such dim-lit cells are used to sew bags and packaging henna.

Sadeqi says that however the profession now has been gradually changed to milling other species, which has now limited to a small cell in the mill entrance.

“The majority of lovers of henna come from Persian Gulf Arab states; some buy it for Hajj; some others buy henna to sell in their home country,” says the expert. “Yazd exports the larger part of henna packaged to neighboring countries and Sistan and Baluchistan, Kerman and southern Khorasan are also frequent destinations,” Sadeqi adds.