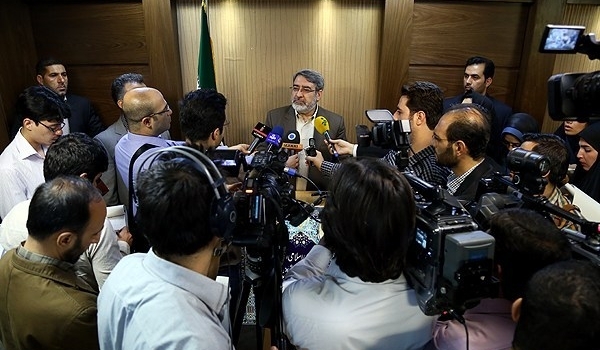 TEHRAN (FNA)- Iranian Interior Minister Abdolreza Rahmani Fazli announced on Monday that the country has detained a number of Afghan and Pakistani nationals on their way to join the terrorist Islamic State of Iraq and the Levant (ISIL).

Speaking to reporters in Tehran on the sidelines of a forum of deputy governors, Rahmani Fazli rejected media reports that the ISIL is recruiting forces in Iran, and said Iran is well aware of the the terrorist group’s plans for Iran and other regional countries.

“The group has extensive plans and based on our documents, they planned to make an aggression against our country and other countries, but Iran is so powerful that such a small group cannot make any aggression against it,” he said.

“Of course, in certain cases, there have been some Afghans and Pakistanis who intended to pass through the Islamic Republic of Iran’s borders (to join the ISIL), but we have prevented their entrance or transit through our borders and have made some arrests in this regard as well,” he added.

The minister said ISIL has sought to recruit Iranians through propaganda on the Internet and even contacted a number of people, but failed.

“We don’t have any problem at the borders; yet terrorists are always seeking to come to the borders to smuggle drugs and explosives. But today the Islamic Revolution Guards Corps (IRGC) and the Law Enforcement Police are making strenuous efforts in Saravan region (in the Southeastern Sistan and Balouchestan province) to further improve people’s security,” Ahmadi Moqaddam said in press conference in the Northeastern city of Mashhad.

Also in August, Iranian Interior Ministry Spokesman Hossein Ali Amiri also stressed full control over the country’s borders, and said the terrorists active in Iraq, including the ISIL, did not dare to pose a threat to Iran.

He said Iran’s border was not under the threat of the ISIL, and added, “This lack of concern doesn’t mean a lack of vigilance as the current conditions necessitate us to be precise and vigilant.”