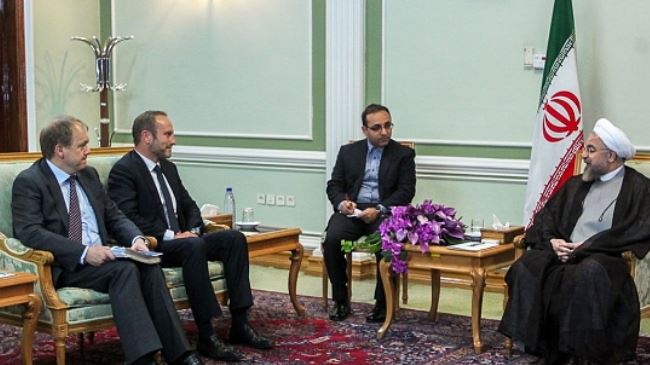 Iran urges halt to support for terrorism in region

Iranian President Hassan Rouhani has warned against the spread of terrorism in the Middle East, calling for an end to support for terrorist groups in the region.

There has been no major change in the policy adopted by certain countries for supporting terrorists in the region, said the president in a meeting with visiting Danish Foreign Minister Martin Lidegaard in the city of Mashhad, the capital city of the northeastern Khorasan Razavi Province, on Sunday.

“Something has to be done to get them (countries backing terrorists) to stop supporting terrorists,” President Rouhani said, adding that continuation of terrorist acts in the region will lead to the spread of violence as well as regional and global instability.

He further reiterated the Islamic Republic’s firm determination in the fight against terrorism, noting “The Islamic [Republic of] Iran is serious in fighting terrorism and will make every effort in this regard.”

Rouhani underlined the necessity to support regional governments and nations, which have been the victims of terrorism, saying, “If regional and influential countries opt to counter terrorists, they will be able to do so in a short time.”

The Danish foreign minister, for his parts, underlined the need to confront terrorists, saying, “Today we are determined to fight terrorists and urge countries backing terrorists to stop backing them.”

The United States and European states have expressed concerns that the Western militants fighting in Iraq and Syria would pose a security threat once they return to their countries. This is while the United States and its Western allies have been actively funding and training the militants.