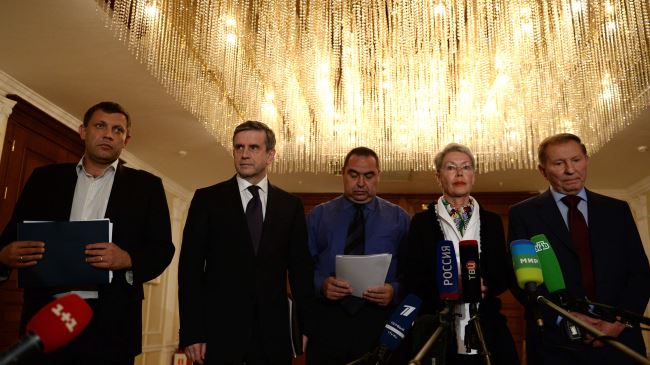 Representatives of Russia, pro-Moscow forces in Ukraine and the Kiev government read a statement after inking a truce deal in Minsk, Belarus, on September 5, 2014.

Iran has welcomed a Russian-backed ceasefire deal recently reached between the Ukrainian government and pro-Moscow forces in an effort to end months of fierce fighting in the country’s east.

On Sunday, Iran’s Foreign Ministry Spokeswoman Marzieh Afkham expressed hope that the deal would fully end the Ukraine crisis and establish “stable peace” in the country’s volatile east through the cooperation of all sides involved in the deadly conflict.

Following negotiations in the Belarusian capital city of Minsk on September 5, Kiev and pro-Moscow forces inked a ceasefire pact aimed at putting an end to heavy clashes in Ukraine’s eastern areas. Moscow had also a representative in the peace talks.

However, the office of Ukrainian President Petro Poroshenko said in a statement on Saturday that he and his Russian counterpart had held a phone call and noted that the ceasefire deal was largely in effect.

Ukraine’s mainly Russian-speaking regions in the east have been the scene of deadly clashes between pro-Russia protesters and the Ukrainian army since the government in Kiev launched military operations in mid-April in a bid to crush the protests.

The unrest has reportedly claimed the lives of more than 2,000 people and displaced around 300,000 others.

Kiev and Western powers accuse Moscow of having a hand in the crisis in eastern Ukraine, but Russia denies the allegation.