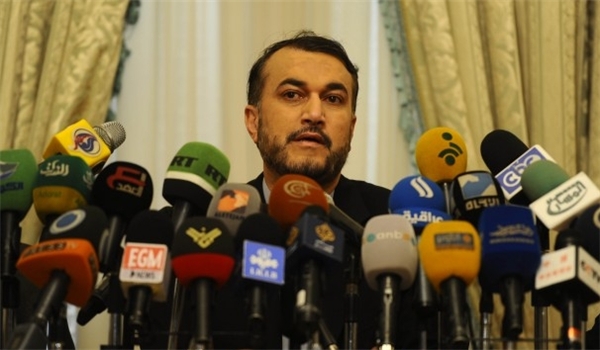 Extremists will fail to harm the friendly and historical relations between Iran and Sudan, Iran’s Deputy Foreign Minister for Arab and African Affairs Hossein Amir-Abdollahian says.

Iran and Sudan are holding formal consultations to solve problems related to the activities of the two countries’ cultural centers, Amir-Abdollahian said on Sunday after the Islamic Republic’s main cultural center in Khartoum was reportedly padlocked.

“We will not allow enemies to cause Shia-Sunni conflict in this country [Sudan],” the Iranian official added.

“Certain media outlets and individuals in Sudan have made baseless allegations with the goal of diverting the public opinion from the main problem of the Muslim world, which is the Zionist regime [of Israel],” Amir-Abdollahian pointed out.

He added that such moves are carried out under the circumstances that the Israeli regime has suffered a heavy defeat in its recent war against the resistant people of Palestine in the Gaza Strip.

Israel started pounding the Gaza Strip in early July, inflicting heavy losses on the Palestinian land. Almost 2,140 Palestinians, mostly civilians, including women, children and the elderly, were killed in the Israeli onslaught. Around 11,000 others were injured.

Last week, Sudan’s Foreign Ministry reportedly told the Iranian cultural center in Khartoum to close and ordered its staff to leave the country.

Many analysts believe that the move by Khartoum might be in response to pressure from Saudi Arabia, which further isolated the indebted and sanctions-hit Sudanese economy earlier this year by denying Sudan access to major Saudi banks.