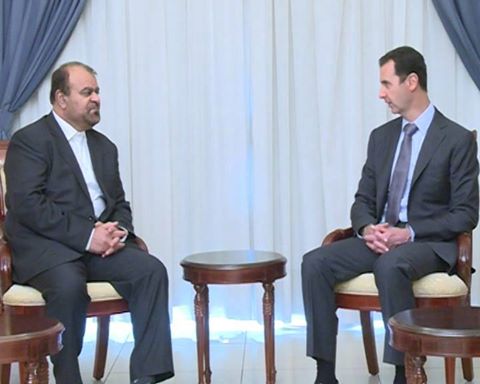 TEHRAN, Sep. 06 (MNA) – Syrian president Bashar al-Assad has said Iran has been crucial in saving Syria and fighting Takfirist terrorists in the country and the region at large.

Basher al-Assad who was receiving  the head of Iran-Syria Economic Development Forum in Damascus on Saturday, appreciated supports by Iran’s Leader, government and the public for Syria in “these critical times.” “Damascus welcomes to use Islamic Republic of Iran’s experiences and achievements in rebuilding Syria,” told Assad to Qasemi.

Assad also welcomed the fact of not having any relations with the west as for the interests of his country and ‘the friend countries.’

“We will initiate the reconstruction process relying upon our indigenous capabilities,” Assad emphasized. He added that Syria would hail Iranian companies to participate in rebuilding of Syria’s infrastructure which had been devastated by the terrorists.

Assad called for setting the grounds for more partnerships between Iran and Syria to exploit all possibilities in economics and trade. “Syrian army set the priority fighting with Takfirists such as ISIL which plagued the eastern Syria with chaos and committed mass murder of citizens, and will eradicate this virus in cooperation with friend countries especially the Islamic Republic of Iran,” Syrian president noted.

Rostam Qasemi said that Syrian public and government exposed the inhumane face of terrorists through resistance. “The majority vote for Assad in the presidential elections in Syria indicated that Syrians resisted terrorism and its foreign imperialist backers,” he added.

“Syrians’ extensive support for the government belied claims made by supporters of terrorists in Syria that Syrian government killed its own citizens,” Qasemi asserted.

Commenting on Iran’s experience in rebuilding war-torn regions, he said that Iran was willing to provide Syria with engineering services and experiences in reconstruction.

“Having defeated terrorist groups, Syria has now entered a new phase of stability and in this new phase, rebuilding of the country is crucial,” Qasemi said.