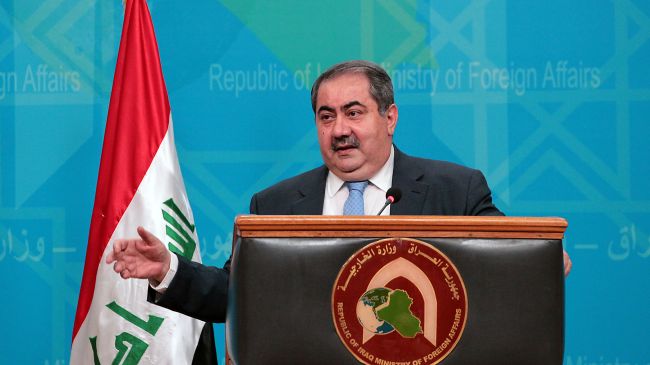 Iraq’s Foreign Minister Hoshyar Zebari has dismissed reports about the presence of Iranian forces in his country fighting the ISIL Takfiri terrorists.

“No Iranian militia has been sent to Iraq. Iraq does not need it,” Zebari said at a joint press conference with his Canadian counterpart John Baird on Wednesday.

“Iran is an important neighbor whose stability is for Iraq stability,” he stressed.

Iranian officials have, on several occasions, expressed support for the restoration of stability and security to Iraq while denying sending military forces to the neighboring country. Tehran says Iraq is itself fully capable of countering ISIL terrorism and there is no need for foreign intervention.

Last month, certain media reports claimed that hundreds of Iranian soldiers had participated in a joint operation inside Iraq with Kurdish forces to retake the town of Jalawla from the ISIL Takfiri terrorists.

In late August, Iranian Deputy Foreign Minister for Arab and African Affairs Hossein Amir-Abdollahian said that Tehran had not sent any weapons or dispatched any troops to the neighboring country in its fight against the ISIL cult.

He, however, said that the Islamic Republic had offered advice to Iraq as well as the semi-autonomous Kurdistan region for this purpose.

Iraq has faced brutal violence by the ISIL across the country’s north and west since early June. The crisis has deteriorated in recent weeks, as the militants have swept across new towns in the north, forcing members of minorities out of their homes.

The ISIL terrorists have threatened all communities, including Shias, Sunnis, Kurds, Christians and Izadi Kurds, during their advances in Iraq.

The Iraqi army, backed by Kurdish fighters and thousands of volunteers, are engaged in fierce fighting with the ISIL militants to push them out of the captured areas.

Senior Iraqi officials have blamed Saudi Arabia, Qatar and some other Persian Gulf Arab states for the growing terrorism in their country.