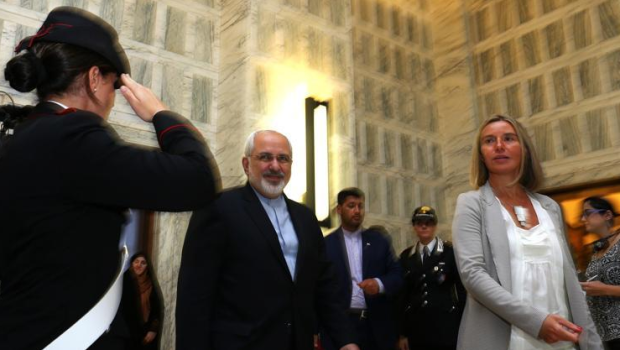 EU’s Mogherini could usher in better relations with Iran

Just as the nuclear-focused talks between Iran and world powers are set to resume, the European Union has named Italian Foreign Minister Federica Mogherini its new foreign policy chief. While current High Representative Catherine Ashton will remain in her post as the key mediator in the negotiations until the Nov. 24 deadline, Mogherini’s appointment has already got people asking: How will she deal with Iran?

Mogherini’s new post (announced on Aug. 30 and beginning on Nov. 1) is good news for Europe’s relations with Iran. In contrast to Ashton, Mogherini has demonstrated the ability to look beyond the nuclear issue and take a broader view of the country.

Lady Ashton deserves praise for attempting to solve the conflict over Iran’s controversial nuclear program, but she was not interested in pursuing any initiatives in bilateral EU-Iran relations until after the nuclear issue was resolved. Her choice of advisors belied her view of Iran as a nuclear problem rather than a country; most of them came from the rather hawkish non-proliferation camp. These advisors credited crippling sanctions with whatever constructive moves the Iranians made, including the interim nuclear deal reached in Geneva last November, while ignoring the significance of other factors stemming from Iranian internal politics. Tellingly, Iran desk officers at the Ashton-led European External Action Service (EEAS), the EU’s fledgling foreign service, were not even included in her delegation to Tehran in April 2014. Such a narrow focus on the nuclear issue has prevented the EU from building more confidence with Iran. It has also impeded the opening of an EU delegation in Tehran as well as dialogue on regional security—steps many experts, and diplomats on the ground in Tehran have long stressed as important and useful.

Mogherini comes to office with a much more promising background than her predecessor. As an expert in political Islam, she understands the complexity of the Middle East and the role different regional actors play. In her remarks to the Foreign Affairs Committee of the European Parliament on Sept. 2 (delivered in her capacity as Italy’s foreign minister), Mogherini expressed confidence that the deal between the P5+1 (US, UK, France, Russia, China plus Germany) and Iran will be reached within the deadline. She also recognized Iran’s and other regional states’ legitimate security concerns, particularly the threat posed by the Islamic State (ISIS) in Syria, Iraq and beyond. In a refreshing departure from the old-fashioned zero-sum logic dividing the region into “allies” and “rogues”, Mogherini acknowledged the need for an inclusive regional security framework to deal with the Middle East’s problems. In this regard a recent high-level meeting between Iranian and Saudi officials was mentioned as a promising development. Mogherini forcefully advocated the role of diplomacy, the need to “talk to all,” and, true to her word, announced talks with Iranian Foreign Minister Javad Zarif the following day.

However, assuming that Mogherini is ready to take a much more pro-active line in building relations with Iran, she will face formidable challenges along the way. Apart from the traditional external naysayers (Iranian exile groups, right-wing pro-Israel lobby organizations), the EU complex’s institutional set-up—involving the Council, Commission, 28 Member States, the Parliament and the EEAS—might prove to be a major hurdle. Besides investing considerable political capital into improving relations with Iran—viewed as a controversial project by many—Mogherini will also have to prove adept at fighting and winning bureaucratic inter-institutional fights. She has some advantages on her side: unlike Ashton, Mogherini hails from a country that has traditionally been at the core of European integration, and she enjoys the backing of Europe’s most influential politician, German Chancellor Angela Merkel. Some personal traits also help—in the European Parliament Mogherini came across as self-assured and vigorous even in hostile environments. According to one senior European lawmaker who asked not to be named, Mogherini has every quality necessary for becoming something more than a “secretary to the ambassadors of the EU member states”—a veiled reference to Ashton’s performance.

In fact, the European Parliament may have lent Mogherini a hand. On Sept. 2, the Foreign Affairs Committee voted on the EU’s general budget for 2015. The budget includes a request for the opening of the EU delegation in Tehran, once the nuclear negotiations are “concluded successfully”—a condition that was introduced by conservative lawmakers who view the move as a reward to Iran rather than a foreign policy tool. But in practical terms it doesn’t change much, since the delegation is not going to be opened before the deadline for the talks anyway. If this initiative survives the trilateral negotiations between the Council, Commission and Parliament over the final shape of the budget, it would be a significant boost for Mogherini’s efforts to build a more forward-looking relationship with Iran.

The EU’s new high representative faces a steep road ahead when it comes to Iran, but Mogherini’s demonstrated instincts and abilities are encouraging. Let’s hope she gets a chance put them into practice.

This article was written by Eldar Mamedov for the Lobe Log on SEP. 3, 2014. Eldar Mamedov has degrees from the University of Latvia and the Diplomatic School in Madrid, Spain. He has worked in the Ministry of Foreign Affairs of Latvia and as a diplomat in Latvian embassies in Washington D.C. and Madrid.