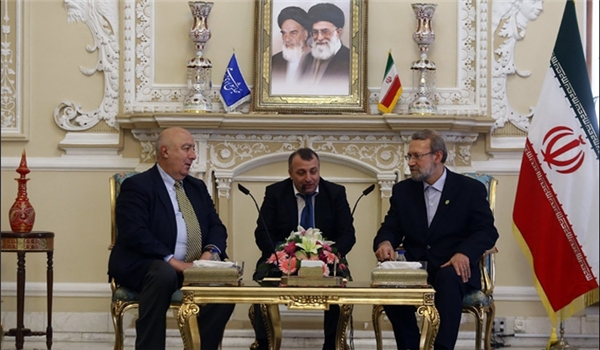 Iran’s Larijani calls for regional cooperation in war on terrorism

“The issue of terrorism is a big problem for the region and fighting extremist currents and terrorism needs the collective cooperation of all the regional countries,” Larijani said during the meeting in the Iranian capital on Tuesday.

Larijani reiterated that Iran has no limit in the expansion of relations with Georgia, and said, “There are suitable grounds in the two countries’ energy sectors to make their private sectors more active and open a new chapter in bilateral economic and trade relations.”

The Iranian parliament speaker pointed to the recent political developments in the region, and said, “Terrorism is a common threat to the two countries and a suitable solution should be found for fighting it through dialogue and constant consultations.”

Japaridze pointed to the recent regional developments, and said, “Terrorism is a common threat to both states and there needs to be constant bilateral dialogue and consultations to find a proper solution to this problem.”

In similar remarks last week, Iranian Foreign Minister Mohammad Javad Zarif in a meeting with Iraqi President Fouad Masoum in Baghdad called for all-out efforts by all regional countries to fight extremism and terrorism in the region.

“The time has come for regional cooperation to have all-out fight against terrorism,” the Iranian foreign minister said during the meeting in the Iraqi capital.

He noted that Iran has been beside the Iraqi nation since the very first day it came under attack by Takfiri terrorists, and said, “We believe that now regional cooperation is needed to fight terrorism and we have also held some talks to this end.”

Iran has recently accelerated expansion of ties and cooperation with friendly countries, including Georgia, and observers believe that the good achievements gained in area of their cooperation should be deemed as a result of the efforts made by the Iranian and Georgian officials.

Iran and Georgia have in recent years accelerated their efforts to expand bilateral and regional cooperation in all domains.

Iranian Foreign Minister Mohammad Javad Zarif and Georgian Ambassador to Iran Ioseb Chakhvashvili in a meeting in Tehran in April underscored the necessity for the further enhancement of bilateral relations, specially in trade and commercial fields.

During the meeting, Zarif referred to the age-old and friendly relations between Tehran and Tbilisi, and underlined the necessity for further efforts by the two sides to obviate obstacles and problems preventing expansion of cooperation and interactions in various areas of trade.

The Georgian envoy, for his part, reiterated Tbilisi’s willingness to expand all-out relations with Tehran, and said he will make his best efforts to further enhance ties between the two countries.