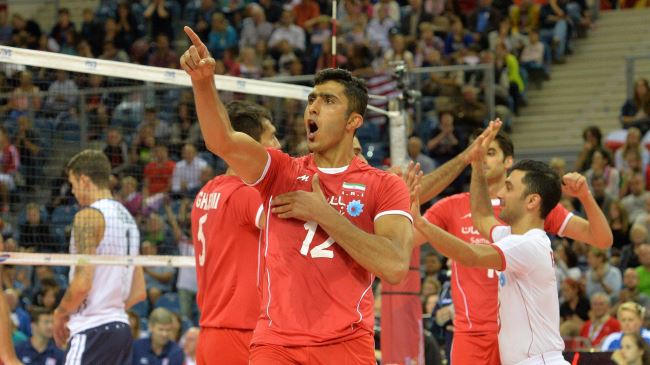 Iran’s Mirzajanpour did well and his side is now 2-0 in a World Championship for their first time ever.

Iran’s national volleyball team has provided another major hit at 2014 FIVB Men’s World Championship in Poland after beating the United States in a thrilling five-setter by 3-2 in Pool D of the competitions.

The Iranians started the match strong and showed a great performance in the first two sets of the game in Krakow, Poland, on Tuesday. They managed to grab the first set a definite 25-23 and the second with a better score of 25-19.

But the Americans, who are the World League Champions, made a come-back by taking the third 25-19 and fourth 25-18, leveling the match at two points apiece.

In the fifth and the deciding set, the Asian Champions stepped-up a gear and came back to snatch the set 17-15, ending the match by 3 sets to 2.

With the victory, Iran is now only one match behind USA in the overall record (2-3).

The Iranian team has been pitted against Italy, the US, Belgium, France and Puerto Rico in Pool D of the championship.

On Sunday, the Iranian volleyball players managed to achieve a valuable 3-1 win against Italy.

The 2014 FIVB Volleyball Men’s World Championship began on August 30 and will end on September 21.