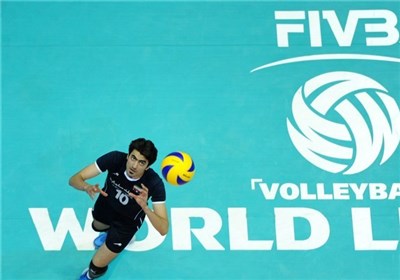 Iran has defeated Italy 3-1 and US 3-2 in its first two matches in the World Championship.

“I feel great, US won the World League this year and we expected they would be a tough opponent. We took risks with the service, which was very powerful, and it paid off,” Ghafour told FIVB.org.

“We won the first and second sets because US had problems receiving our serves. After that, they made some changes, replaced some players and they played much better. We started having problems with reception, but motivation in our team was very high, so we overcame the problems and won the whole match,” he added.

“We definitely must improve our reception, because it didn’t work well in the third and fourth sets. I’m not concerned about serving – it was very effective. Also our setter is one of the best in the world,” the Iranian added.

“We were concerned mostly about the US team. The remaining teams are also good, however, I think that the biggest risk when playing with our next opponents is to lose our concentration and start making mistakes. I think we are prepared to win Pool D.”

“We have come here with 14 great players in the team, who can be replaced on the court. All of them are strong pillars of the team, and can contribute to our further success,” Ghafour concluded.