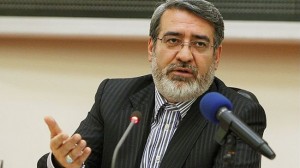 TEHRAN (FNA)- Iranian Interior Minister Abdolreza Rahmani Fazli categorically dismissed the media reports on the presence of the Islamic State of Iraq and the Levant (ISIL) terrorists in Zahedan city in the Southeastern Sistan and Balouchestan province.

Rahmani Fazli’s remarks came after some media outlets reported that the ISIL is present in Zahedan and some residents of the city have shown sympathy towards the terrorist group.

“We have by no means any report in this regard,” the Iranian interior minister told reporters after a cabinet meeting on Wednesday.

Asked if there has been any clashes between the ISIL terrorists and the Iranian border guards, Rahmani Fazli expressed satisfaction in the full preparedness of the country’s security and military forces along the borders, and stressed that in case of any attempt to cross “our redlines, we will take immediate action”.

He further noted the current conditions in Iraq, and said a good situation has been created after different peoples started convergence, which, he said, has empowered the country and helped it defeat the ISIL terrorists in several fronts.

In similar remarks last month, Prosecutor of Abadan city, in Southwestern Iran, categorically rejected media reports on the ISIL presence in the city.

“The prosecutor’s office has not yet received any credible reports from the intelligence and police forces in this regard,” Ahmad Shir Alizadeh told FNA.

“This is just a rumor and the presence of this Takfiri group in any part of the country is impossible due to the security forces’ vigilance and extraordinary preparedness,” he added.

The prosecutor further criticized some domestic media for ignoring the criteria and standards for verifying and validating news reports before releasing them, saying such irresponsible moves disturb the public.

In relevant remarks also last month, Iran’s Police Chief Brigadier General Esmayeel Ahmadi Moqaddam underlined full security at the country’s borders, and said the necessary defensive measures have been adopted to keep the terrorists of the ISIL away from Iranian borders.

“We adopted the necessary defensive and operational measures when the members of the ISIL started their massive operations in Iraq, and we are still vigilant and prepared,” Ahmadi Moqaddam told reporters in Tehran.

He further pointed out that Iran is enjoying high level of security and stability, despite growing insecurity in a string of the regional nations, saying, “Taking into account the conditions prevailing in the region, we enjoy a desirable security condition in our country.”

Ahmadi Moqaddam said that crime rate has decreased in Iran during the last year, adding that no or little terrorist actions occurred in the country last year.

Also Iranian Interior Ministry Spokesman Hossein Ali Amiri reiterated full control over the country’s borders, and said the terrorists active in Iraq, including the ISIL, do not dare to pose a threat to Iran.

Stressing the good and secure conditions at Iran’s borders, he underlined that no specific threat is posed to the country’s borders.

Amiri said Iran’s border is not under the threat of the ISIL, and added, “This lack of concern doesn’t mean a lack of vigilance as the current conditions necessitate us to be precise and vigilant.”