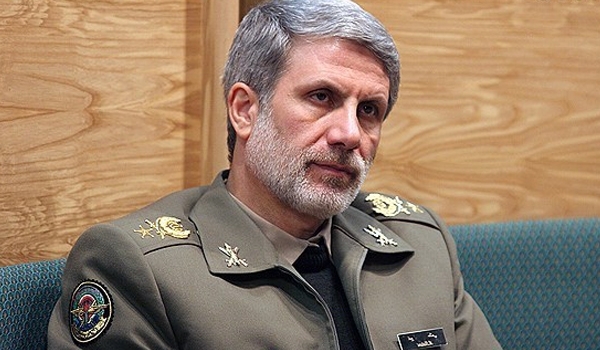 “The ballistic missiles of the Islamic Republic of Iran’s Armed Forces are now equipped with pinpoint precision capability in very good ranges both on land and at sea and this means might and power with the message that we can destroy any point of threat on land and at sea and push the enemy far away from the Islamic Republic of Iran’s borders,” Gen. Hatami said, addressing a ceremony held to mark the national Government Week in Tehran on Wednesday.

He praised Iranian experts’ industrious efforts, saying after the country went under sanctions and “the enemies prevented the Armed Forces’ access to long-range and high-altitude air defense shields, the defense industries’ experts have been designing and building all the needed air defense systems of the country for short, mid and long ranges and altitudes, relying on domestic knowledge”.

The General also pointed to Iran’s progress in naval fields, and said all the Iranian Navy’s needed tools, weapons and systems, including vessels and submarines in different classes which are equipped with various electronic warfare and advanced missile and anti-air defense systems, are built domestically.

He also pointed to the Iranian Air Force advancements, and said all the hi-tech equipment needed by the country are designed, built and repaired by Iranian experts, including the manufacture of advanced and well-quipped drones for various purposes.

The Iranian Army has recently test-fired different types of newly-developed missiles and torpedoes and tested a large number of its home-made weapons, tools and equipments, including submarines, military ships, artillery, choppers, aircraft, UAVs and air defense and electronic systems, during massive military drills.

Defense analysts and military observers say that Iran’s wargames and its advancements in weapons production have proved as a deterrent factor, specially at a time of heightened threats by the US and Israel.