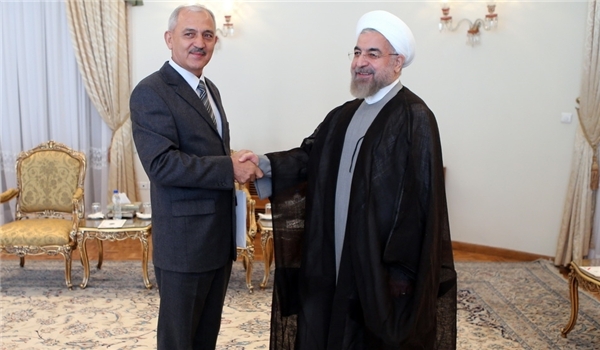 Rouhani calls for broadening of ties among Persian-speaking nations

TEHRAN (FNA)- President Hassan Rouhani underlined the need for the expansion of relations among Iran, Tajikistan and Afghanistan as the three countries speak in the same language as their means of communication.

“The Persian-language speaking countries should broaden their relations in all areas,” President Rouhani said during a  meeting with Tajikistan’s new Ambassador to Tehran Nematollahzadeh Emamzadeh said in Tehran today.

The Iranian president pointed to the historical and cultural commonalities between Iran and Tajikistan, and said, “Tehran and Dushanbe have always had vast relations in political, economic and cultural areas and they should (further) expand their cooperation in all areas by utilizing all the existing capacities.”

President Rouhani pointed to his upcoming visit to Tajikistan to take part in a meeting of the Shanghai Cooperation Organization (SCO), and said, “In bilateral meetings between the two countries’ senior officials, solutions for the implementation of previous agreements will be reviewed, and the two sides will consider regional issues and cooperation in the in Shanghai meeting in Dushanbe.”

The Iranian president reiterated that there are many suitable grounds for cooperation between the Iranian and Tajik investors in the state and private sectors, and that suitable mechanisms and facilities for using all the existing potentials should be devised within the framework of a joint cooperation commission.

“The Islamic Republic of Iran has always supported and will always support establishment of stability, peace and security in Tajikistan,” President Rouhani said.

President Rouhani will visit Tajikistan on September 12-13, 2014 to take part in the upcoming summit of the Shanghai Cooperation Organization (SCO) and hold bilateral talks with the heads of state present in the high-profile meeting, including his Tajik counterpart.

“I am hopeful about the fruitful results of President Rouhani’s visit to Tajikistan and his negotiations (with senior Tajik officials),” Atayev told FNA.

He noted that President Rouhani’s visit, which will be his first since he ascended to power, will be of paramount importance and will open a new chapter in the two countries’ mutual cooperation.

“The Tajik officials expect fruitful results from the upcoming negotiations and constructive talks between the two sides,” the Tajik foreign ministry spokesman said.

In similar remarks on Wednesday, Caretaker of Iran’s Diplomatic Mission in Tajikistan Seyed Mahmoud Sadri said the upcoming visit of Iranian President Hassan Rouhani to Tajikistan will be followed by many positive outcomes.

“A sum of 10 cooperation pacts, mainly in economic areas, will be signed by the two countries’ senior officials during President Rouhani’s upcoming visit to Dushanbe,” Sadri told FNA.

He noted that President Rouhani’s upcoming visit will open a “new chapter in the two countries’ bilateral ties”.

Sadri pointed to the previous meetings between Iranian and Tajik presidents, and said, “President Rouhani and (Tajik President) Emomali Rahmon in their past two meetings exchanged views on the necessity to expand cooperation and complete removal of obstacles and we hope that this visit will speed up the present positive trend.”

The Iranian top diplomat also noted that the Iran-Tajikistan joint economic cooperation commission is due to hold a meting during President Rouhani’s visit to Dushanbe.

“When the new government started its operation and began reassessing the quality of Iran’s relations with the foreign countries, specially the regional countries, a clear landscape was envisaged in foreign diplomacy and friendship with the neighboring countries,” he added.

Founded in 2001, the SCO comprises Russia, China, Kazakhstan, Kyrgyzstan, Tajikistan and Uzbekistan. The organization consolidates efforts to counter terrorism and radicalization among member countries, and also works on other policy areas such as politics and trade.

Afghanistan, India, Iran, Mongolia and Pakistan have observer status, while Belarus, Sri Lanka and Turkey are classed as dialogue partners of the SCO.