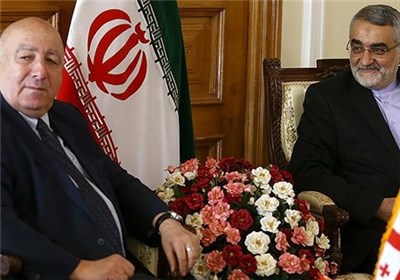 TEHRAN (Tasnim) – A surge in the terrorist activities across the Middle East region, as in Syria, Iraq and Afghanistan, stems from the “wrong” policies adopted by Westerners, a senior Iranian lawmaker said.

“The wrong policies of the West and the US have caused the spread of terrorism in the region,” Chairman of the Iranian Parliament’s National Security and Foreign Policy Commission Alaeddin Boroujerdi said in a meeting with Chairman of the Foreign Relations Committee of Georgia’s Parliament Tedo Japaridze, here in Tehran on Monday.

“Countering such an ominous phenomenon will be possible only through cooperation among the region’s countries,” the Iranian MP said of counter-terrorism efforts.

Boroujerdi further called for increased interaction between the Iranian and Georgian officials on the regional and international issues.

For his part, Japaridze voiced Georgia’s willingness to enhance relations with Iran, which he hailed as a “great country with rich civilization.”

Earlier in April, Iranian Foreign Minister Mohammad Javad Zarif emphasized the necessity for removing obstacles in the way of the improvement of bilateral relations with Georgia.

He had also highlighted the great potential for the expansion of relations between Tehran and Tbilisi in all spheres especially in the area of trade and economy.