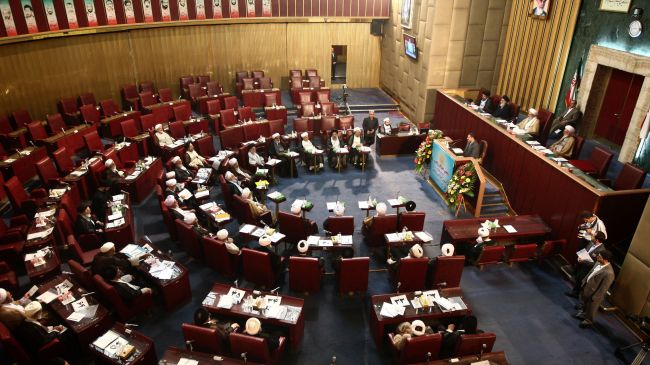 16th Summit of Assembly of Experts opens in Iran

The 16th Summit of Assembly of Experts kicked off in the Iranian capital, Tehran, on September 2, 2014.

The 16th Summit of Iran’s Assembly of Experts has begun in the capital, Tehran, with the country’s senior officials in attendance.

The two-day event kicked off in Tehran on Tuesday with an opening speech by Acting Chairman of the Iranian Assembly of Experts Ayatollah Mahmoud Hashemi Shahroudi.

Current chairman of the Assembly of Experts, Ayatollah Mohammad-Reza Mahdavi Kani, remains hospitalized after suffering a stroke in early June.

The participants will pay tribute to the late founder of the Islamic Republic, Imam Khomeini, at his mausoleum in Tehran on Thursday.

The Assembly of Experts is a body of Islamic Jurisprudence scholars who are directly elected to office in a national poll. It holds meetings twice a year to review major national issues and every other year to appoint a new chairman.

The body is tasked with monitoring the performance of the Leader of the Islamic Revolution and the institutions working directly under the supervision of the Leader. It also shoulders the responsibility of electing the Leader when the need arises.