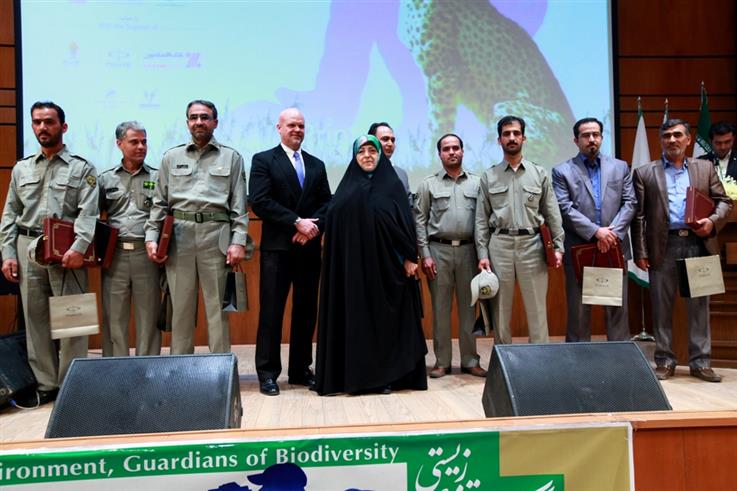 Day and night, our planet and its beautiful natural resources are guarded by individuals who give new meaning to the words sacrifice, courage and compassion.  Game Guards are the dedicated watchers of the environment and the primary guardians of our Iranian biodiversity.

To mark the occasion of National Asiatic Cheetah Day the Department of Environment and the UNDP jointly organized a ceremony to celebrate outstanding Iranian Game Guards and activists from the Conservation of the Asiatic Cheetah Project.  The objective was to recognize the remarkable contribution of these individuals in safeguarding our environment.

In Tehran government officials along with representatives from the diplomatic community, NGOs, Academia, members of the private sector, media and UN representatives came together to applaud the dedication of these men and women whose mission in life is defined by their sense of duty to our shared global heritage – the environment.

In his remarks the UN Resident Coordinator & UNDP ResidentRepresentative, Mr. Gary Lewis said:“Today, we know of the Mazandaran Tiger and the Persian Lion only from the windswept statues or faded photographs that bear their images. All have been killed or forced into extinction.  They are gone forever.  But it is not too late to save the Asiatic Cheetah.
”He added: “We believe that the decline in the number of these beautiful – emblematic animals may have stopped.  Now their numbers may be on the increase once again.  The main reason for this recovery – for the possible turnaround in numbers – is simple.  It is because there are few people – a very few people – in our society, who strive – day in and day out – to keep the Asiatic Cheetah from harm.”
“Some – like our academic partners – do this through the written word.  Some – like our friends in the NGO community – do it through the spoken word.  Some – like our corporate sponsors – give us the resources to host awareness-raising events like the one we are having here this morning.  And we thank you – and we recognize you all” said Mr. Lewis.

Mr. Gary Lewis (Left) along with Dr. Masoumeh Ebtekar presented awards to the Game Guards, NGOs, Academia and corporate sponsors of the ceremony

He then highlighted the remarkable contribution of the Game Guards by stating: “Many – like Iran’s Game Guards – our Mohit Bans – do it through their actions.  Actions which often place these doer-of-deeds in great personal peril.  Peril of being shot at by poachers.  This is no idle threat.  Some Game Guards have been shot at – and wounded – in the line of duty […] Ladies and Gentlemen, Iran’s Game Guards are heroes. They are local heroes.  And they are global heroes.  Through their actions which directly save our biodiversity, these heroes are paving the way for a future which is sustainable.  Through their actions we have come to recognize that all species deserve to co-exist and share our beautiful, endangered, planet.”

Also speaking at the event was Vice-President and Head of Department of Environment, H.E. Dr. Masoumeh Ebtekar.  “Environmental issues and the protection of species at a local level is considered as a global issue today.  That is an important achievement for humanity – the fact that we realize today that our actions at a local level have global implications.  Therefore, our responsibilities extend beyond our geographical boarders. We have global responsibilities.”

She then emphasized on the protection of the Asiatic Cheetah as also being a global issue.  She added: “To reverse the destiny of the Asiatic Cheetah, we need a careful and efficient plan which includes the involvement of the local communities as well as the efforts of the highest national and international level officials and organizations.”

Game Guards are the dedicated watchers of the environment and the primary guardians of our Iranian biodiversity.

“Today, I stand next to you, delighted and honoured to represent and acknowledge the efforts of our Game Guards from all parts of Iran.  We owe a great share of our success in preserving our environment to the dedication of Game Guards who serve in the remote areas.  They believe that protecting the environment and its species guarantees nature sustainability for the future and that is why they have devoted their life to this high-risk path.  It is the duty of each and every citizen to join the Game Guards and others who follow their path to conserve the environment and its biodiversity for today and the future.”
She was then joined by Mr. Lewis on stage to present awards to the Game Guards, NGOs, Academia and sponsors of the ceremony – Eghtesad Novin Bank, Bidar Trading Company and Vijeh School of Visual Communication.