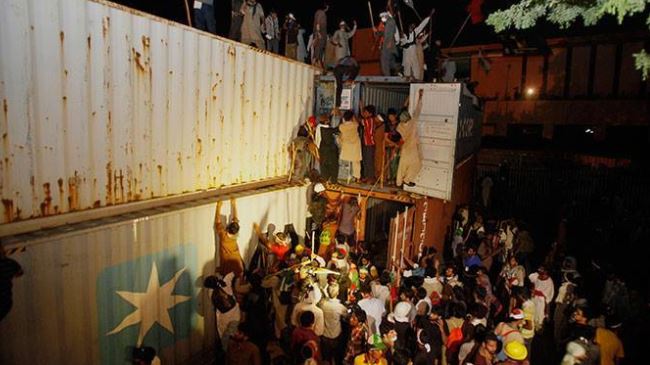 Iran calls for peaceful settlement of disputes in Pakistan

Iran has renewed calls on all parties involved in the ongoing political crisis in Pakistan to sort out their differences through peaceful means.

On Sunday, Iranian Foreign Ministry Spokeswoman Marzieh Afkham once again urged all parties engaged in the Pakistan conflict to exercise self-restraint in an effort to protect the interests of the Pakistani nation.

“A stable Pakistan which adheres to the principles of democracy will be in the interests of all, including the country’s nation and [other] regional states,” Afkham stated.

The Iranian official further expressed hope that the existing issues in Pakistan would be settled as soon as possible through the vigilance of the country’s political leaders.

Pakistani opposition leader, Imran Khan, who heads the Tehreek-e-Insaaf (PTI) party, and cleric Tahir-ul-Qadri, the head of Pakistan Awami Tehreek (PAT), have been leading daily protest rallies in the capital Islamabad since mid-August.

Khan and Qadri say the country’s May 2013 general election, which was won by Sharif’s Pakistan Muslim League-N (PML-N) party, was fraudulent. They also want an overhaul of the country’s electoral system to make it fair.

The demonstrators demanding the premier’s resignation have camped outside government offices for over two weeks. However, Sharif has remained defiant in the face of calls for him to relinquish power.

The Islamabad government has so far held several rounds of negotiations with the opposition groups, but to no avail.