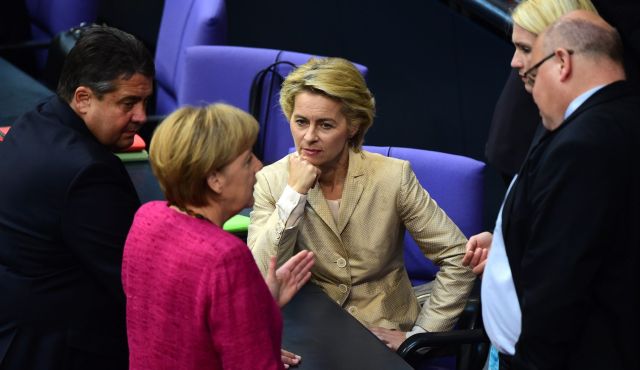 Germany Chancellor Merkel, second left, and German Defense Minister Ursula von der Leyen, center, talking with other ministers prior to a special session of the Bundestag, Sept. 1, 2014. Photo by AFP

Germany to send Iraqi Kurds enough weapons for 4,000 fighters against the Islamic State.

“The far-reaching destabilization of an entire region affects Germany and Europe,” Merkel said in a speech to parliament Monday, a day after Berlin published a list of weapons, including machine guns and hand grenades, that it will send to the region.

“Ladies and gentlemen, when terrorists take control of a vast territory to give themselves and other fanatics a base for their acts of terror, then the danger rises for us, then our security interests are affected,” she added.

Germany will send enough weapons to arm 4,000 Kurdish fighters in northern Iraq battling against IS, formerly known as the Islamic State of Iraq and Syria, whose advances threaten to destabilize the Middle East, Defense Minister Ursula von der Leyen said on Sunday.

Breaking with a postwar policy of not sending arms to conflict zones, Chancellor Merkel said northern Iraq is an “exception” because of the nature of IS’s violence.

“The lives of millions of people, the stability of Iraq and the whole region and … due to the high number of foreign fighters, our security in Germany and Europe are being threatened,” read a government statement, after Merkel met some of her ministers to discuss details of the aid to the Kurds.

“It is our humanitarian responsibility and in the interests of our security to help those suffering and to stop IS.”

Germany, like other European countries, is concerned about the prospect of war-hardened, radicalized Muslims returning home and posing a domestic security threat.

German intelligence estimates that at least 400 Germans have joined IS. The head of the domestic intelligence agency says there is evidence that five German citizens and residents have carried out suicide attacks for the insurgents in recent months.

Germany has already shipped humanitarian aid to support Iraqi Kurds, as well as defensive equipment such as helmets and body armor, but no weapons. It has sent six soldiers to the general consulate in Erbil to help coordinate the effort.

The United States is pushing for an international campaign against IS, which has seized a third each of Iraq and Syria, declared open war against the West and has declared a caliphate in the heart of the Arab world.

Opinion polls suggest the German public has no appetite for getting involved in the conflict and Merkel has made clear she would not send combat troops there.

The delivery will take place in several tranches in safe areas not immediately affected by the war, the government said. Training on complex weapons will take place in Germany, or if that is not possible, near Erbil or in a third country.

The German opposition has warned the weapons could end up in the wrong hands and parliament will debate the aid on Monday.

The government says sending arms to the Kurds does not make it more likely Berlin would do the same for Kiev in its fight against pro-Russian rebels. Von der Leyen told a Sunday paper that they were very different conflicts.

In Ukraine “dialogue is possible,” she said, while IS “don’t talk – they want to set up a caliphate and they annihilate those who think differently.”