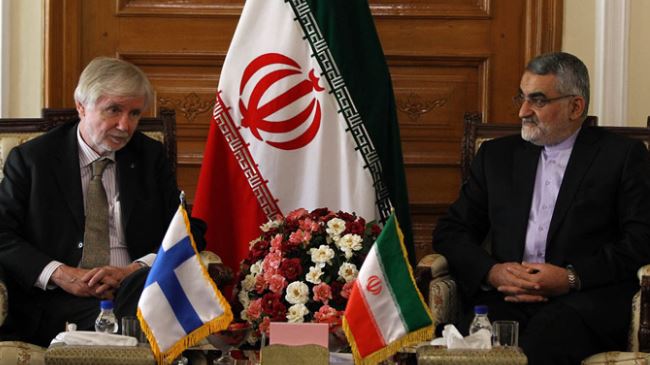 A senior Iranian lawmaker has slammed a fresh round of US sanctions against the Islamic Republic as contradictory to the interim nuclear deal between Iran and six powers, saying the new sanctions prove that Washington cannot be trusted.

“By imposing new sanctions against our country which is in flagrant violation of the nuclear agreement between Iran and the P5+1, the US once again showed that it is not trustworthy,” chairman of Iran’s Majlis National Security and Foreign Policy Committee Alaeddin Boroujerdi said in a meeting with Finnish Foreign Minister Erkki Tuomioja in the Iranian capital, Tehran, on Sunday.

The Iranian parliamentarian added that the Islamic Republic is serious in its nuclear negotiations with the five permanent members of the UN Security Council plus Germany and honors its commitments under the interim Geneva deal.

“And there is the logical expectation that the opposite sides, too, seek to solve the [nuclear] issue through a positive approach, honest behavior, and goodwill,” he said.

The top Finnish diplomat, for his part, said the European countries are resolute in advancing nuclear negotiations with Iran towards a final agreement that would benefit both sides.

He also declared his country’s willingness to boost political, economic, social and cultural ties with Tehran once anti-Iran sanctions are lifted.

The sanctions come as the Islamic Republic and the five permanent members of the UN Security Council – the United States, Britain, France, Russia and China – plus Germany are in talks to reach a final nuclear agreement.

The two sides signed a historic interim deal in the Swiss city of Geneva in November 2013. The agreement entered into force on January 20 and expired six months later. In July, Iran and the six countries agreed to extend their negotiations until November 24 in a bid to work out a final accord.

The next round of talks between Iran and the six countries will be held in New York in September.