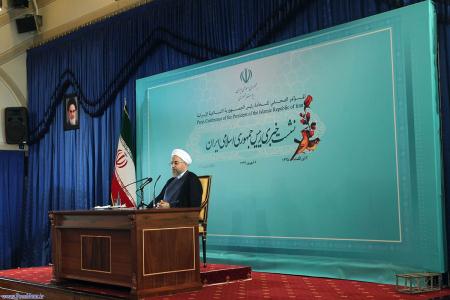 TEHRAN August 31 (Shana)–Iran’s President Hassan Rouhani has said that his administration is serious in enhancing oil and gas production in the country.

He told a press conference in Tehran that 100 mcm/d is to be added to the country’s gas production this calendar year to March 2015.

“Next [calendar] year, the same amount will be added to the country’s gas production capacity and we have also projects for [developing] gas reservoirs shared with neighboring countries,” said Rouhani.

“The 11th administration has made many efforts to sell oil and gas condensate as much as the country needs,” he said.

The president said the government has also taken useful steps in favor of the environment by distributing euro-4 gasoline in big cities.

Rouhani also said that the country’s inflation rate is to be cut to below 20 percent this year.

He said the inflation rate is to become single-digit in 2016.

The fall in the inflation rate started in November 2013, two months after Rouhani warned that the Iranian economy was in a state of stagflation.

The inflation rate passed the 40-percent ceiling at the end of former President Mahmoud Ahmadinejad’s tenure, despite his initial campaign promises that he would reduce the country’s inflation rate to a single-digit level.

Analysts believe that a rise in production of goods and services has reduced liquidation and led to the fall in the inflation rate.