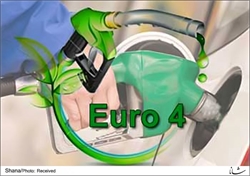 Since taking office in August last year, Prudence and Hope government has decided to reduce pollution in the mega cities and has tasked the petroleum ministry with distribution of euro-4 gasoline and gasoil in mega cities in order to improve the quality of air and protect the environment.

Environmental reports indicate that distribution of euro-4 gasoline and gasoil in mega cities has considerably contributed to reduction of air pollution in the capital and other populated cities.