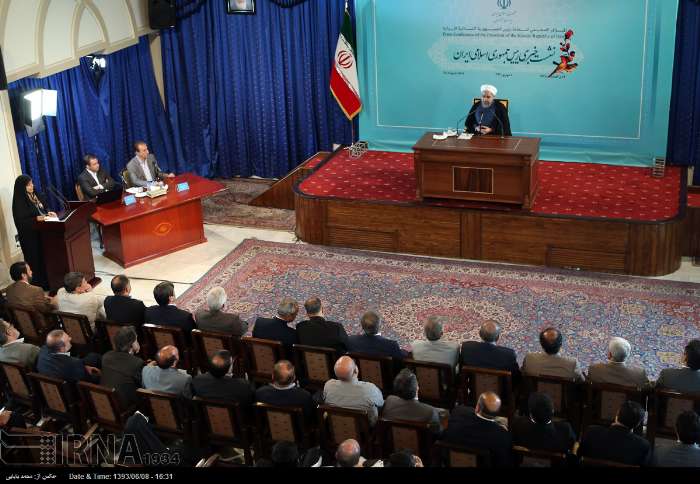 Addressing a press conference, President Rouhani said that in meetings with Chinese President on the sidelines of andduring the Shanghai session in Kyrgyzstan the expansion of mutual ties was stressed.

ˈWe have held talks and met twice until now and definitely we will have other meetings in the future. Some of our targets for expansion of relations have been met and we are to attain other goals following the talks.ˈ

He said there was agreement in the Shanghai session to form six working groups with each group following up its own plan in the coming months so that the agreement will be drafted for the summit with the Chinese President in the future.ˈ

ˈOf course, if we reach an agreement with the G5+1, the conditions will be more different and it will be much easier to expand economic relations with all countries including China.ˈ

He then said under current conditions, one of the countries having good cooperation with Iran at a time when Tehran is under sanctions was China and we expanded cooperation in the past one year and bilateral ties will expand as well in light of the agreements to be reached in the future.

The President said as he had predicted in New York if no serious action was taken in that connection, the world would be gripped by violence, extremism and terrorism, affecting not only the Middle East but many other states. ˈWe see today what extremism, violence and terrorism do in the region. You see that in the entire region we are unfortunately witnessing acts of terror by both terrorist groups and the Zionist regime.ˈ

He said the countries claiming to fight terrorsim should be serious in their claim and their words should be consistent with their deeds.

Asked on sanctions, he said they are illegal and violation of the rights of the great Iranian nation and that ˈWe should resist such an aggression with all might and power.ˈ

He said Iran will overcome such illegal sanctions. ˈWe consider some of the sanctions crimes against humanity. Definitely, we will resist any sanction and find their own solution.ˈ