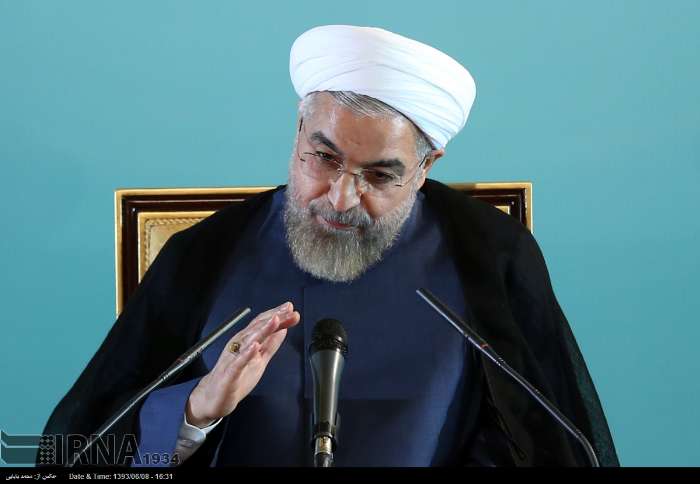 Tehran, Aug 30, IRNA – President Hassan Rouhani said on Saturday that the the government will vindicate the nationˈs rights by intensive diplomatic campaign against the arbitrary sanctions.

The president made the remarks in a press conference with domestic and foreign reporters on the last day of the Government Week.

In the meantime, the press conference reflects performance of the Government of Hope and Prudence.

President Rouhani said, ˈIn case of honesty, we can reach agreement in the remaining opportunity and the tyrannical sanctions must be lifted.ˈ

He said that the path is a little a bit complicated.

ˈWe hope that we will reach agreement in the continuation of the path and the tyrannical sanctions must be lifted.ˈ

On the economic policy of the government, President Rouhani said that government managed to curb inflation in the past one year and abide by its promise to bring the spiralling inflation to 25 percent.

He said that inflation rate will be 23.2 percent and less than 20 percent by end of the year.

He added that of course, government plans to ensure one-digit inflation in 1395 (2016-2017). ˈOur imagination is that God willing, we will meet the target and if the job is done that will be for the first ever in 40 years to have one-digit inflation.ˈ

He noted that the next point is recession, which is the most important economic issue.

He said that the statistics of the Central Bank of Iran which is a little a bit different with that by the Statistics Center and the minor differences have always been in place between the two statistics centers.ˈ

President Rouhani said, ˈWe will continue lowering inflation in the coming years.ˈ