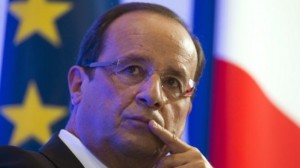 French President Francois Hollande is considering inviting Iran to a conference he has proposed to address terror activities by the ISIL Takfiri group in Middle Eastern states.

In an address to a group of French diplomats, Hollande said the Islamic Republic could be an interlocutor on ways to deal with the dangers posed by the ISIL terrorist group that is wreaking havoc on Iraq and Syria, the Wall Street Journal reported on Thursday.

“It’s true that the crisis in Iraq has demonstrated our preoccupations aren’t always on diverging paths,” added the French leader.

The French president has proposed holding an international conference on the ISIL threats in the capital Paris within the coming weeks.

In similar remarks on August 20, French Foreign Minister Laurent Fabius told the country’s parliament that Paris plans to bring together Iran, Arab states and the permanent members of the UN Security Council to coordinate a comprehensive response to the ISIL Takfiri militants.

The foreign-backed Takfiri militant group has terrorized various communities, including Shias, Sunnis, Kurds, Christians and Izadi Kurds, in their advances in Iraq.