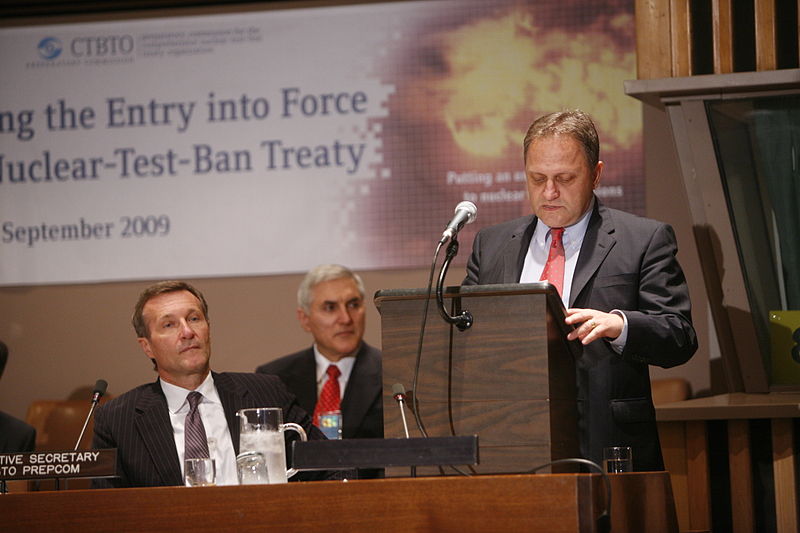 Tehran, August 28, IRNA — UN Secretary-General Ban Ki-moon in his message for the International Day against Nuclear Tests, 29 August 2014, called for an end to all nuclear tests in order to achieve a world free of nuclear weapons.

ˈOn this day in 1991, Kazakhstan closed the nuclear test site near Semipalatinsk. On that same date in 1949, the Soviet Union conducted its first nuclear test, followed by another 455 nuclear tests over succeeding decades, with a terrible effect on the local population and environment,ˈ Ban said according to UN Information Center in Tehran .

ˈThese tests and the hundreds more that followed in other countries became hallmarks of a nuclear arms race, in which human survival depended on the doctrine of mutually assured destruction, known by its fitting acronym, MAD.

ˈAs Secretary-General, I have had many opportunities to meet with some of the courageous survivors of nuclear weapons and nuclear tests in Hiroshima, Nagasaki and Semipalatinsk. Their resolve and dedication should continue to guide our work for a world without nuclear weapons.

ˈOn this International Day against Nuclear Tests, let us all take a fresh look at those survivors’ stories. Listen to their words and imagine the effects of these detonations as if they were experienced by each of us. Only then can we can better understand the imperative to renew our commitment to a world free of nuclear weapons and nuclear tests.

ˈI wish to appeal particularly to citizens of those States that have not yet ratified the Comprehensive Nuclear Test-Ban Treaty (CTBT), especially the eight remaining Annex 2 States whose ratification is required for the Treaty’s entry into force: China, the Democratic People’s Republic of Korea, Egypt, India, Iran, Israel, Pakistan and the United States.

ˈTogether, let us demand an end to all nuclear tests, get on with the unfinished business of achieving a world free of nuclear weapons, and usher in a safer and more prosperous future.ˈ